10 of the Bizarre Hybrid Gadgets 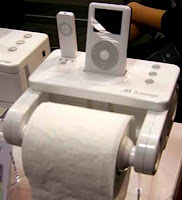 Atech’s “iLounge hybrid toilet paper dispenser/iPod dock” supports all iPod models that have a dock connector and has an integrated USB slot for the Shuffle. Speakers are hidden in the dispensers arms with navigation buttons located conveniently on top for easy access. Well, now you will not miss a song while in the bathroom! 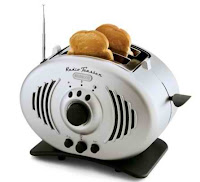 Who doesn’t like to start the day with a slice of toast and the morning news? Well, thanks to Hammacher Schlemmer, you can now enjoy both AM pleasures with one energy-saving, space-saving appliance, the Radio Toaster. It comes with all the usual bells and whistles of both appliances but it’s all packed into one cool looking design. It guarantees perfectly toasted bread every time and even has a removable crumble tray for easy clean up. What more could you ask for? 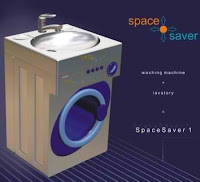 This combination washing machine and sink appliance is called The Spacesaver and it’s truly a… wait for it… spacesaver. While it’s a pretty good idea, what will happen to all the junky cleaning products I store under my sink? And where does the dryer go? Maybe if this was a more green product where the wastewater from the sink was cleaned up and used to wash the clothes I would be more in favor of it, but as it is now- it needs some work. 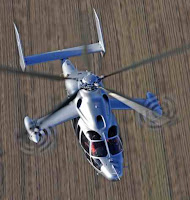 The helicopter has really changed the way that many things are done since it was invented. Traditionally, the helicopter has a rotor or two up top and a tail rotor. The upside to the design is that it can take off and land vertically. The downside is that a rotorcraft isn’t as fast as a fixed wing aircraft. Eurocopter has announced that its X3 Hybrid combining rotors with propellers has hit a speed much higher than normal helicopters are capable of. The X3 hit speeds of 232 knots or 430 km/h in testing. This will be a fantastic aircraft for rescue mission where speed is critical. 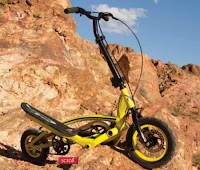 If you are too old for a trike, and love to ride a bike, maybe you would like a Zike, the world’s first hybrid scooter. I suppose by “hybrid scooter”, the company means it is the first product to successfully combine a scooter, bicycle, and stair-stepper together. Inventor Nathan Scolari was “compelled to combat the childhood obesity epidemic in the United States”, and this is what he researched and created.

The McCar is presently on display at the Shanghai Motor Show, and it is both a car and scooter at the same time. The purpose of the car and scooter combo is so the user/driver is able to use the scooter to get to where he or she is going if the place is far away from where he or she had to park. For example, let’s say you park in a huge parking lot at the mall, and instead of walking the city blocks to get to your favorite store, you unload the scooter from the back and drive there. 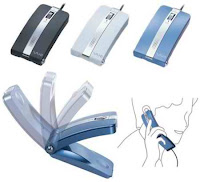 One of the nice things about using Skype on a laptop is that it’s a hands-free experience: The laptop’s built-in microphone picks up your voice, and speakers relay the other end of the call. But Sony’s VN-CX1A mouse, which doubles as a VoIP phone, needlessly complicates both your phone calls and your mousing. Question: What happens when you need to use the computer during a call? 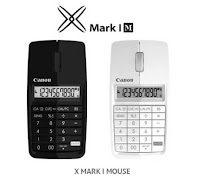 Canon has created a wireless mouse that doubles as a calculator. The X Mark I mouse, only available in the U.K., has Bluetooth 2.0 connectivity, 1200 dpi resolution, and three clickable buttons, including a scroll wheel, with the keypad placed beneath it. The crazy thing is, this isn’t that wild a mashup, depending on how much data entry you do on your PC. Certainly, as much as desktop operating systems have advanced, the concept of clicking around an onscreen calculator hasn’t changed much, which is to say it hasn’t gotten less tedious. Some people might actually find pressing the numbers directly to be a more natural user experience, although some of us can still barely touch type. 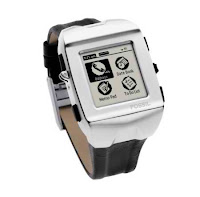 This is the Fossil FX2008 – a wrist PDA watch powered by the Palm OS platform. Described as “a revolutionary personal organizer cleverly disguised as a stylish wristwatch.”

César López, a sculptor from Colombia, takes rifles formerly used by paramilitary units in his country and turns them into guitars. The idea came to Lopez back in 2003 when, while playing in front of a Bogota country club, he witnessed a car bomb explode. In the ensuing confusion, he noticed how the army guards all carried their rifles in a manner that resembled the way he carried his guitar and out of that explosion came the first escopetarra—a Winchester rifle/Fender Stratocaster hybrid.