10 of the Must-Try Adventure Places in the Philippines 10 of the Must-Try Adventure Places in the Philippines
jrplaza
1.1k
SHARES
FacebookTwitter

Sometimes, the ones who are bound to you are the one who makes a great influence to you. Sharing a story to a friend about the places you’ve been is good, but bringing them to that place and letting them feel and experience the same feeling of what you have felt when somebody have shared it to you is better.
We only have three seasons of life:

What season are you now? When will you be able to do outdoors and have some adventures? May these pieces of pictures encourage those people out there to see top 10 lists of the many magnificent art works of God, from mountains to beaches, from ocean and seas to waterfalls, from boulders to caves, from northern part of the Philippines to the southern part of the country, Swim, hike, and explore! 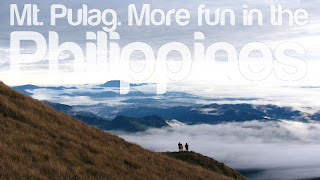 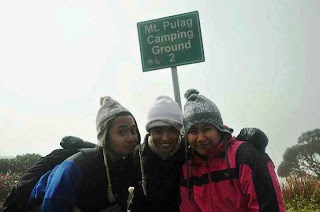 Mt. Pulag also known as the “Playground of Gods”, standing at 9,586 feet above sea level, found in the Cordillera region of Central Luzon, is the highest mountain in Luzon and second highest in the Philippines next to Mt. Apo. The Mt. Pulag National Park is open all year round. Dry season is the best time to trek up to the summit preferably from the month of November to March for you are able to witness breath taking sea of clouds.

Most of its visitors and guests were attracted not only in its low temperature and spectacular sea of clouds, but also on its unique characteristics for its rolling plains, mossy forest and an amazing eye soothing greens which defines its biodiversity. You can camp on the top but only on designated areas. Be sure that you have warm clothing to protect yourself in cold weather as the temperature drops.

The mountain is classified as a major climb with its five defined trails to reach on to the summit which defines it difficulty. These are the Ambangeg trail, also known as the executive trail and the easiest, the Eddet trail, Tawangan trail, Ambaguio trail, and the Akiki trail which is said to be the most difficult among the five. 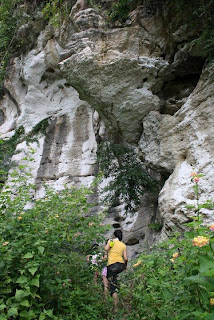 (Lipata Caves of Quezon Province) From Lipata Island is said to have seven 7 Caves which called the Lipata Caves. The said island is found at the Bondoc Peninsula in Quezon which takes you 3-4 hours drive from Manila.

It will take you a 20-30 minutes boat ride from the Padre Burgos Pier, the jump off area, to the island. From the Island a 15-20-minute trek will transpire you to see rock formations at the side of the mountain and amazed with the stalactites and lime stones inside the caves. You can also witness the view of the sea from above along the trail.

The rock formation inside the caves gives amazement into its visitors. The soil of Lipata caves are rich in minerals which are transported by the residents all the way down to the foot of the mountain which is used for growing their crops. However, mining in the caves is prohibited. This activity will surely destroy the caves’ natural rock formations. 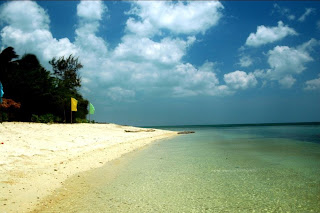 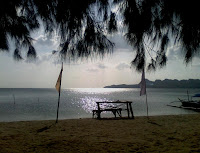 From the province of Quezon lies an island name Dampalitan. Its white sandy beach and long stretch shorelines attracts most of its visitors. The beautiful long stretch of the beach and quiet place returns a peaceful and relaxing experience with nature.

Rocky formation will be seen during the low tide. You can even take your photo almost at the middle of the sea. Take those shots while enjoying the light of the sunset in the place.
A bench near the seashore is best for a seat to watch on the dramatic scene of a sunset along with your best friend or love ones. 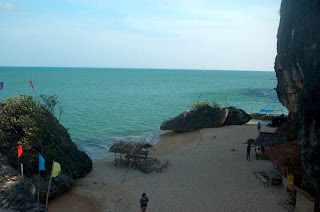 Not far from the Dampalitan Island is the Borawan Island which is name after the combination of Boracay and Palawan for its characteristics of white sand and huge rock formations similar to that of Palawan’s cliffs. You can enjoy the beautiful scenery of the place with its crystal clear water, and long stretch white beach at the west coast of the island.

You can climb on to the top of the huge rocks ranging from 15-20 feet high allows you to view the west and east coast of the island and take shots of your pictures. Be careful on climbing because the edges of the rock are quite sharp.

Camping is allowed in the island, but make sure that you have your head lamps, flash light, extra batteries, and drinking water with you. There is no electricity and fresh water available in the area. If you are avoiding a crowd in the place, you can visit the island before the summer euphoria begins. 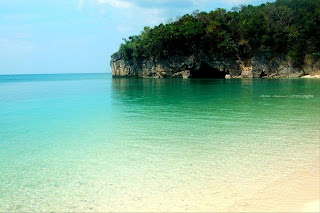 Pagbilao Grande Island in Pagbilao Quezon is also called as “Isla Putting Buhangin” with its fine white sand. It’s cold crystal clear water and white sand stretch attracts its guests. In here also found the “Kwebang Lampas”, a cave located at the east point of the stretch, and one of the highlights when you go in Pagbilao Grande.
The water here is more ideal for swimming compare to the nearby islands of Borawan and Dampalitan. The Pagbilao GrandeIsland is not that crowded with people compared with other beach resorts near it. You can go to the cave known as the “Kwebang Lampas” by passing through the rocky area at the side of foot of the cliff at the east point of the island. Be careful of the slippery rocks you may encounter while going inside the cave. Cold and relaxing views from the cave will definitely sooth you to the nature.

It is like a secret paradise to witness a captivating view of the Dos Hermanos Island from the Cape Engano Lighthouse also known as the “Farol de Cabo Engano”. Located at northern point of Palaui Island, Sta.Ana, Cagayan, an 18th Century light house built during the Spanish time which guides the ships on the coastal areas of Sta.Ana. 229 steps of concrete stair and a trail will lead you all the way to the lighthouse.

Palaui Island was declared as a National Marine Reserve in August 28, 1994 encompassing an area of 7,145 hectares (17,660 acres). The waters around the island boast of 21 commercial species of fishes with about 50 hectares (120 acres) of undisturbed corals.

The hike from Punta Verde, the southeast tip of Palaui, to Cape Engaño takes about 3.5 to 4 hours of hike through beautiful verdant scenery. Primitive camping is allowed at the lighthouse vicinity. [source: wikipedia]

7 – 7 Chambers of Callao Cave in Cagayan 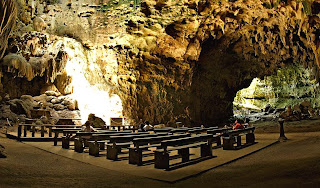 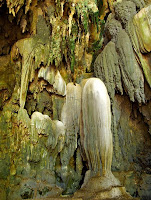 The Callao Cave is located on the Province of Cagayan near Tuguegarao City. According to the locals, the cave has seven chambers and formations namely as the Column, Chapel, Skeleton, Elephant’s Head, Praying Angel, Rocket, Lion’s Head, and the Dog’s Head; the 7th chamber is usually closed except during the holy week.

The photo above is the second chamber of the cave which became a Cathedral by the locals of Cagayan. Each chamber allows the natural light to enlighten the dim areas of the cave. Before witnessing the magnificent cave of stalactites and stalagmites, you have to pass the test of your stamina by surpassing a stair with approximately 200 steps. It said that there are still unexplored areas after the seventh chamber of Callao Cave.

[1] Callao Cave has gained another reputation after the discovery of a foot bone on a excavation done near the first chamber’s entrance was proven by archaeologist to be about 67,000years old pushing back the long known Tabon man of being the oldest discovered human remains in the country. this did not just brought a new record within the country but has also placed the Philippines in the sixth position worldwide to have found the oldest Homo sapien fossil. 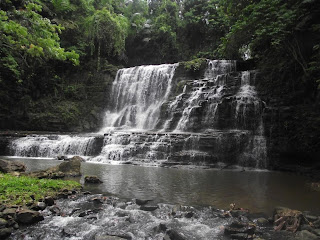 From the Latin City of Asia, Zamboanga, found a magnificent piece of hidden treasure in Merloquete Falls, located at Sitio Merloquet, Barangay Sibulao, Zamboanga City. An approximate 2 hours drive from the city all the way to the jump off. From the jump off, it will drive your excitement band test your endurance by a 15 minutes downhill trek before witnessing the enchanted and majestic waterfall. 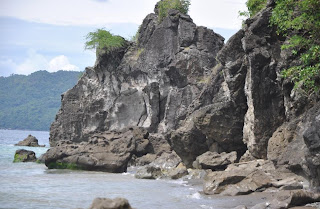 Not from afar from an overnight hike to Mt. Gulugod Baboy in Mabini Anilao, Batangas, was an amazing side trip to witness scattered boulders of rocks near at the beach. It was really surprising to see and walk on through the rock before having a swim in the clear waters of Anilao.

Anilao Batangas is well known as one of the best diving sites not only in the Philippines but all over the world. Unknowingly, there is a secret place for explorers and hikers to hangout out there to discover and see the beauty of these boulders with the strong waves splashing and playing on it.

At the end of the rocky stretch found a small cave where in you can stay. From there, you can choose where to swim by passing through it. You can also see bats inside the cave when you look upward inside, and requires you for a duck walk to pass through the other side and enjoy beautiful scenery of the sea. 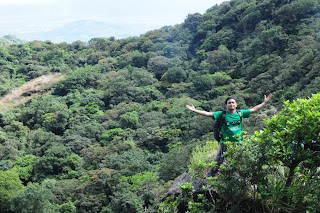 Mt.Makiling situated at Los Banos Laguna is one of the known enchanted mountains in the Philippines because of the mystical Diwata (fairy) Maria Makiling who takes care of the mountain. According to te locals, you can encounter Diwata Maria Makiling in three persons, you can see her as a maiden, a mother, and an old woman along the trail while trekking on the mountain.

Rising with a 1109 meters above sea level, Mt.Makiling is not just simply an enchanted mountain, but classified as a volcano. It is one of the most challenging must try day hike that probably test your patience and thrill you into the adventure.

[1]The Makiling Traverse is a classic example of an extended dayhike – a climb whose trekking time makes it a “major climb” but whose trail circumstances favor a long dayhike. It is a favorite training climb for mountains that are Difficulty 8/9 or higher – such as Mt Guiting-Guiting – and for good reason: a Makiling Traverse gives hikers a preview of extended hiking (8 hours/day) over a period of three or even four days. Moreover, Makiling gives samplers for various. Melkas Ridge, for example, is an introduction to the long rock scrambling of Guiting-Guiting; the proliferation of limatik and jungle density is the same environment of Halcon; and the meanderings of the Wild Boar Trail evoke Napulauan. Finally, the ‘thrill’ of a traverse is a junior version of what it takes to cross over Dulang-Dulang to Kitanglad, or Kidapawan to Kapatagan.

ContributorDesha Alimbuyuguen is an adventurous girl who have the passion for the love of nature. She is often called the “Backpacker Girl” since she often go for nature camping with her mountaineer friends.