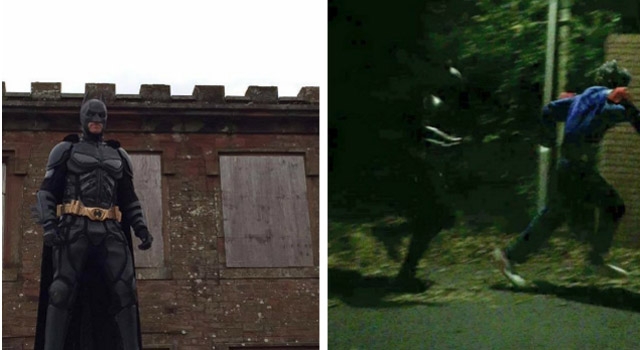 The killer clown craze that began in the United States has gone global.

According to news reports, it has now reached the United Kingdom, Australia, Canada and some parts of Asia.

The bizarre craze has now become one of the top priorities of the police force as they are continuously receiving calls from frightened residents around their area.

The problem is, the police simply can’t make an immediate arrest of people dressed up as crazy clowns.

There’s no law (as far as I know) that prohibits a person from walking down the road or sitting/standing in a corner dressed up like a clown.

Yes, they can make them go away for a while but sooner or later, they will be back to instill fear and trauma. So if the police can’t do anything to make the creepy clown sightings stop, who else can? BATMAN! In a news report, a man from Cumbria, United Kingdom dressed as The Dark Knight is trying to single-handedly end the killer clown craze in their area.

The man behind the BATMAN costume reportedly vowed to chase down the creepy clowns until they are all gone.

He will continue to patrol the streets of Whitehaven and nearby places to give the children some reassurance that they are safe.

In a series of photograph posted on Facebook by BBC Cumbria, one of them shows “Batman” seemingly chasing off a “killer clown”.

According to the post, Cumbria Superheroes, a local costume company, is behind the effort to rid the streets of creepy and crazy clowns.

They also reassured that BATMAN will not act as a vigilante, but just trying to reassure local children who are scared of the “killer clowns”.

'Crazy clowns' beware… Batman is in Whitehaven. Cumbria Superheroes heard that many children had been left…

Seeing a crazy, creepy killer clown is not a fun experience, especially in a dark road at night.  But if you see one and BATMAN is not around, just arm yourself with anything that can make then run.

For example, you can use a beer bottle just like what this man did after seeing a sinister figure holding a hammer in a car park.

This man shockingly thanked thief who broke into his car. Find out why!
This extraordinary bike lock will make thieves vomit when they try to steal your bike!