10 Best Comic Books of All Time That You Need To Read Before You Die
jrplaza
1.9k
SHARES
FacebookTwitter

Comic books are once a head turner stuff when strolling down the sidewalk, simple glance in the newsstand but it seems I’m stock just on that.

I never been indulge in getting one and read them through, but there are people whose hobby is to collect comic books and they can’t get over it.

I can’t fathom the degree of these people in which reading such stuff all over again and at point blank when they reach the last page “to be continue” and feel hell when they have to wait for the next issue.

I really wanted to create a top list of these comic books (sort of, just for personal reference if I get my interest hype up) and for that reason, I’m really thankful to have my friend Jay of Comicbookandmoviereviews.com in assisting and compiling the best comic books of all time.

Please do bear in mind that this is a personal choice and the comic book list is not in any particular order.

The big question here: are your favourite comic books in the list? Well, let’s find out. 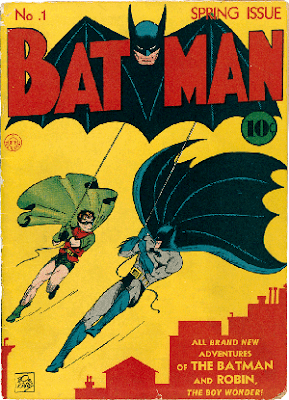 Jay: “Because he is Batman, right?”Batman is a fictional character, a comic book superhero created by artist Bob Kane and writer Bill Finger.

The character first appeared in Detective Comics #27 (May 1939), and since then has appeared primarily in publications by DC Comics.

Originally referred to as “The Bat-Man” and still referred to at times as “The Batman”, he is additionally known as “The Caped Crusader”, “The Dark Knight”, and “The World’s Greatest Detective,” among other titles. 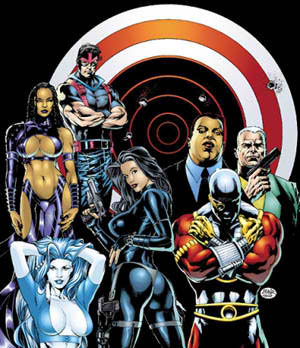 Jay: ”The John Ostrander version from back in the day was a class act, and one that has been difficult to follow ever since.”The Suicide Squad, also known as Task Force X (actually the name of a closely related but independent supervisory organization), is a name for two fictional organizations in the DC Comics Universe.

An “original” Suicide Squad was retconned into existence in Secret Origins (vol. 2) #14, in order to form a connection between the two Squads.

The current Suicide Squad (created by John Ostrander in the aforementioned Legends #3) is an anti-hero team of incarcerated super villains who act as deniable assets for the United States government, undertaking high-risk black ops missions in exchange for commuted prison sentences.

The group operates out of Belle Reve Penitentiary, under the command of swashbuckler Ryan Scott. 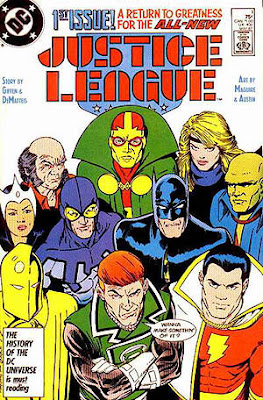 Jay: “The Keith Giffen League is one of the funniest comic’s ever published. Willy-willy, bum-bum, fanny.”Justice League International (or JLI for short) is a DC Comics superhero team written by Keith Giffen and J. M. DeMatteis, with art by Kevin Maguire, created in 1987.

It was created after the 1987 company-wide crossover limited series, Legends, when a new Justice League was formed and given a less America-centric mandate than before.

The term JLI covers several different names for the series, including the first six issues, which were titled simply as Justice League, and the later issues when the book was renamed Justice League America (without the “of”). 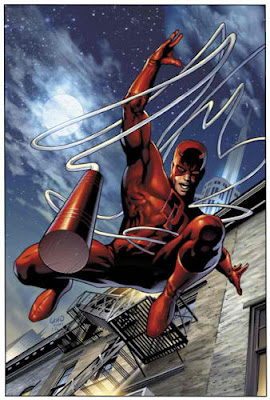 Jay: ”Mark Waid current run on this title, plus the Brian Bendis run as well, has made this blind hero into one with the most vision.”Daredevil is a fictional character, a superhero that appears in comic books published by Marvel Comics.

The character was created by writer-editor Stan Lee and artist Bill Everett, with an unspecified amount of input from Jack Kirby, and first appeared in Daredevil #1 (April 1964).

Living in the Hell’s Kitchen neighbourhood of New York City, Matt Murdock is blinded by a radioactive substance that falls from an oncoming vehicle.

While he no longer can see, the radioactive exposure heightens his remaining senses beyond normal human ability. His father, a boxer named Jack Murdock, supports him as he grows up, though Jack is later killed by gangsters after refusing to throw a fight.

After donning a yellow and black, and later a dark red, costume, Matt seeks out revenge against his father’s killers as the superhero Daredevil, fighting against his many enemies including Bullseye and the Kingpin.

Daredevil’s nickname is “the Man without Fear”. 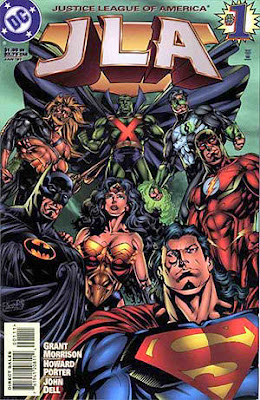 Jay: ”Grant Morrisons time on this book made a silver age classic into modern day gold.”The Justice League, also called the Justice League of America or JLA, is a fictional superhero team that appears in comic books published by DC Comics.

The team roster has been rotated throughout the years with characters such as Green Arrow, Captain Marvel, Black Canary, the Atom, Hawkman, Hawkgirl, Plastic Man, Red Tornado, Firestorm, Zatanna, other Green Lanterns, and dozens of others.

The team received its own comic book title in October 1960, when the first issue was published, and would continue to #261 in April 1987, which was the final issue. 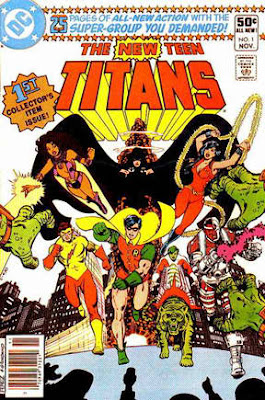 Jay: ”Marv Wolfman was the man who made this team into something more than just wannabe sidekicks, he made them into icons.”The Teen Titans, also known as the New Teen Titans, New Titans, or simply the Titans, is a fictional superhero team appearing in comic books published by DC Comics, often in eponymous monthly series.

As the group’s name suggests, its membership is usually composed of teenaged superheroes.

The first incarnation of the team unofficially debuted in The Brave and the Bold #54 (1964) as a “junior Justice League” featuring Robin (Dick Grayson), Kid Flash (Wally West), and Aqualad, the sidekicks of Leaguers Batman, the Flash, and Aquaman, respectively.

The group then made its first appearance under the name “Teen Titans” in The Brave and the Bold #60, joined by Wonder Girl (Donna Troy), the younger sister of Wonder Woman. 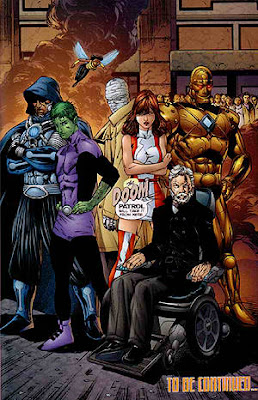 Jay: ”Keith Giffen wrote it and made it his own.

Say no more.”On February 7, 2009, it was announced at the New York Comic Con that Keith Giffen would be spearheading a revival of Doom Patrol, a title which he has long said he wanted to write.

He was joined by artist Matt Clark, who has also long expressed a desire to work on the team.

The new series focused on the core members Elasti-Girl, Negative Man, Robotman, and the Chief, while other members such as Mento, Bumblebee, and Vox were to be seen later. 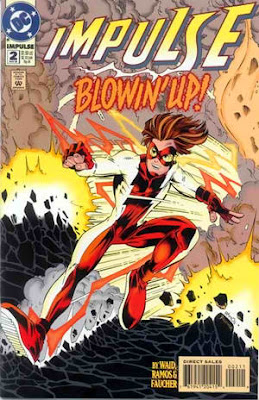 Jay: ”When Mark Waid was at the helm, this youthful side-kick had some kick to him.”Kent Shakespeare was the first DC Comics superhero known as Impulse, he debuted in Legion of Super-Heroes vol. 4 #12 (October 1990).

Iris West is the third superhero known as Impulse, she debuted in Flash vol.4 #225 (October 2005) 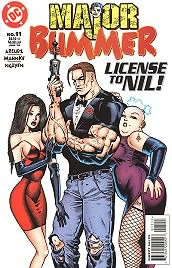 Jay: “Apart from the strange title, this comic was a really fresh tale of the reluctant hero, and one that has been plagiarised from then on in.”This is a humorous comic book produced by DC Comics in the late 1990s.

It was created by writer John Arcudi and artist Doug Mahnke. 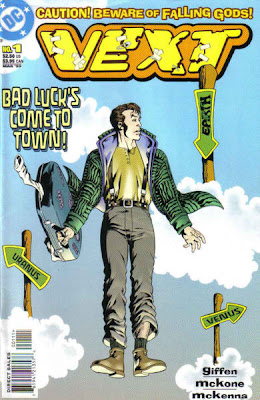 Jay: ”There was a God of farts in this comic, so what is not to like?”Vext is a fictional character created by Keith Giffen and the star of a short-lived 1999 comic book series published by DC Comics.

The series was written by Keith Giffen, pencilled by Mike McKone, inked by Mark McKenna, lettered by Bob Lappan, and colored by Lovern Kindzierski with separations by Digital Chameleon for all six issues (with guest inker Andy Lanning filling in on issue 4).

The series was the last one edited by Kevin Dooley before he left comic books and was assisted by Harvey Richards.