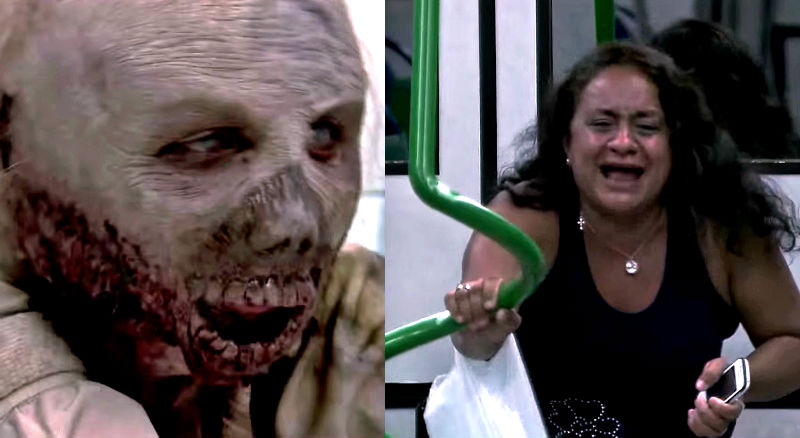 HenSpark / Latest Stories / Entertainment / Horror / Is This the Most Horrific Zombie Apocalypse Prank Ever?

Is This the Most Horrific Zombie Apocalypse Prank Ever?
Danielle Ramos
1.1k
SHARES
FacebookTwitter

It is amazing how far some pranksters would go just to scare their unsuspecting victims.

Though most pranks are harmless and quite funny, there are those that go beyond reason as the pranksters try to create the best prank no one has ever tried before.

The results of such pranks are often crazy!

I would surely die of fright if I become the unsuspecting victim of such an elaborately scary prank.

I’ve seen some of the craziest elaborate pranks on YouTube but nothing prepared me for the subway zombie prank carried out by Brazilian program Silvia Santos.

This has become controversial after a lot of people complained that the pranksters have gone too far and that this was not a prank because it was too cruel to be one.

The prank preyed on women who were mostly traveling by themselves during a late night trip on the metro.

Though I must say these women were quite admirable for bravely traveling alone in the train, even when they were the only ones inside.

Now, the pranksters wore torn clothing and realistic zombie make-up which made them look like real zombies from the movies. This was also an admirable part of the prank that they were able to make everyone look their part.

The metro authorities were in on the joke, too, because the lights would flicker by the time the train reaches the designated station where the zombies are waiting.

However, considering that the women were alone or were too few against the horde of zombies, you could just imagine their fright when the flickering lights reveal the undead trying to claw their way in!

Clearly, that was not terrifying enough for the pranksters because they made sure one of the zombies got inside first, sowing terror on board the train.

But all hell broke loose when the train doors opened. One of the women victims even fainted out of fear!

Now, I do understand the mindset of the pranksters who must have thought that no one in the world really believes real zombies existed yet they should have also taken other factors into consideration.

For example, though these people might not believe in zombies, it was crazy not to feel scared if you are trapped in a malfunctioning train while horrific-looking people are trying to creep in!

Some of the women were brave enough to fight back but were powerless against the horde! I wonder if they had the courage to ride a train again after figuring in that prank…

Watch the terrifying video and tell us what you think.

Did the pranksters go overboard with this prank?