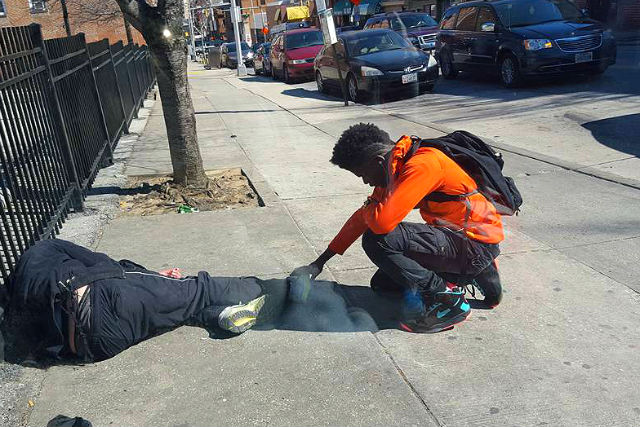 A young man has gained the internet’s admiration after he was photographed praying over a homeless guy sleeping at the side of a street in Baltimore, Maryland in the US.

Police Officer Eric Gaines for the University of Maryland, Baltimore, had seen the boy who appeared to be aged 15 or 16 approach a sleeping homeless guy.

After seeing the guy sleeping on the sidewalk, the boy stopped, knelt over the figure, touched the guy’s shoe, and began praying in earnest.

The homeless guy was sleeping near a bus stop and the boy appeared to have been waiting for the bus when he stopped and prayed for the older guy.

I watched as this young kid was walking pass, stopped and walked over to this sleeping homeless man; touched him and…

According to Gaines, the boy did not appear to be doing it for others to see and seemed to have done this on his own accord because “he almost missed his bus while he was praying for the guy, which confirmed that he did it for no other reason than to pray for him.”

Gaines who goes by the handle Jonathan A. Stormz on Facebook admitted that he was glad the photo had gone viral on social media to change the way people think about the youth today.

After all, the younger generations have a negative reputation of being self-centered.

Gaines said, “People have preconceived notion of young men. Not all are lost. Some are doing wonderful things in the neighborhood and community and it’s not getting the same publicity in the media.”

After witnessing the touching moment, Gaines believed he really had to post the photo to prove to the people that there is still hope for the youth of today, especially those in Baltimore.

He wrote in the now viral Facebook post, “I watched as this young kid was walking pass, stopped and walked over to this sleeping homeless man; touched him and began praying over him… This was an amazing sight! I pray this kid becomes a leader amongst his peers, and continues on this path!! Not all Baltimore youth are lost!!”