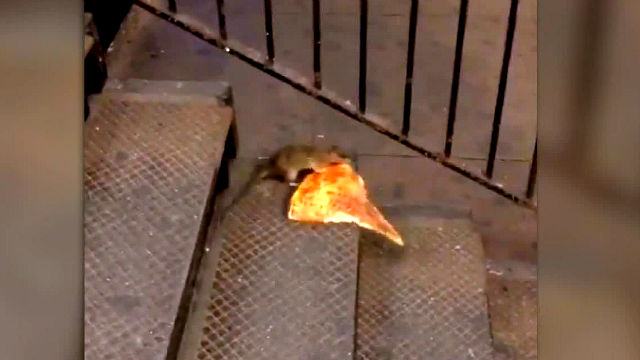 Fans of the Teenage Mutant Ninja Turtles (TMNT) are ecstatic over a video of a rat struggling to get a slice of pizza down a flight of stairs as this could be proof that the TMNT could be real – or, at least, Master Splinter!

To non-TMNT fans, let me enlighten you. The TMNT are human-sized mutant turtles named Leonardo, Donatello, Raphael, and Michelangelo who were raised and trained in the arts of ninjutsu by a human-sized mutant rat named Master Splinter.

Pizza is their favorite food – something that was actually chosen by TMNT creators Kevin Eastman and Peter Laird as it was the food they often ate while they were working on the original TMNT comics.

Faced with lots of pizza while brainstorming and working on the comics, it was but natural that they would incorporate that in their works.

These two major pizza chains have long battled for TMNT sponsorship, even back in the 1990 original movie wherein Domino’s Pizza prevailed but Pizza Hut managed to sneak in a commercial right at the very beginning of the VHS tapes.

Back to the viral “pizza rat”, this creature was seen struggling with a huge slice of pizza – the brand of which we aren’t sure of, actually.

The pizza was actually larger than the rat but it persevered even as the stairs of the subway station proved to be a difficult obstacle.

It appears that the rat was going to succeed in getting this piece home, back to the turtles perhaps, but it suddenly noticed that it was being filmed (alright, we made that up!), so it stopped in its tracks and left the pizza slice on the stairs.

Of course, it was probably just afraid of people but we’re quite sure that rat went back to collect the piece once the cameraman was gone!

While a lot of people enjoyed the video, especially because of its TMNT ties, there were many (quite surely non-TMNT fans) who could not understand what made this clip viral.

After all, it was just a video of a rat trying to move a pizza slice down a flight of stairs, right? Well, what can you say about this?