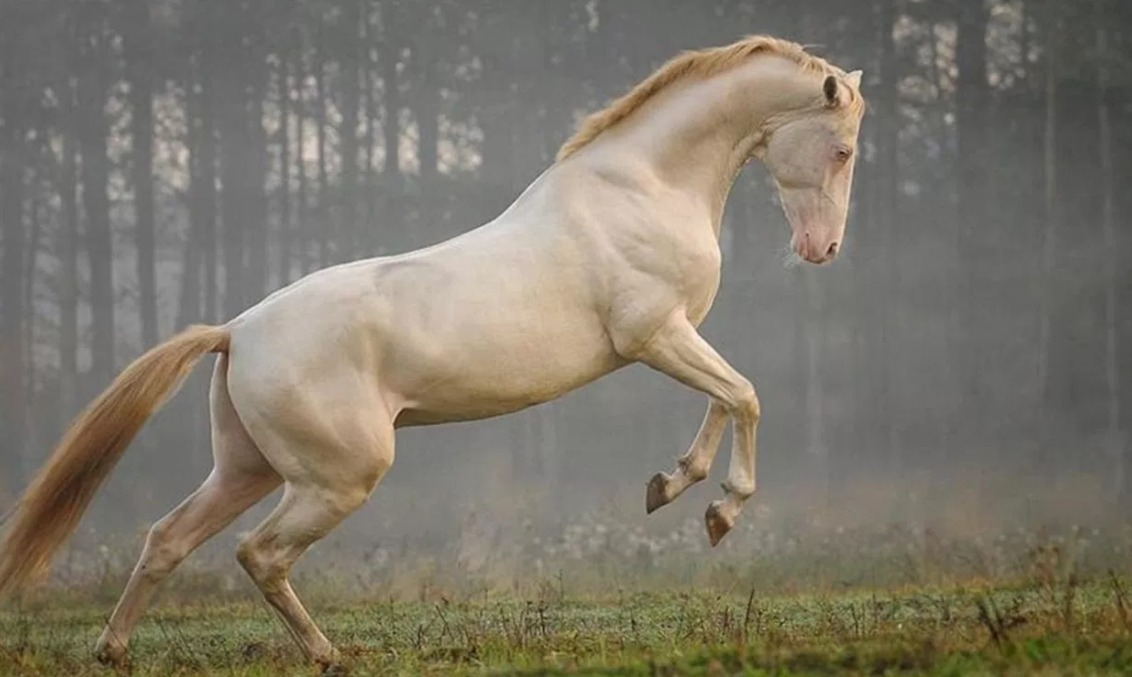 10 of the Rarest Horse Breeds in the World
Henry Park
1.3k
SHARES
FacebookTwitter

Which rare horse breed is your favorite? Is it the exquisitely stunning Akhal-Teke or the ingenious color design of Knabstrupper? Or do you even know one?

There are so little variety of rare horse breeds that it would take an enormous amount of fortune to get a hand at them. We will help you select your type of rare breed for every purpose, horses come in all shapes, colors, and sizes.

From german horses with very hard to pronounce names to american horses that are almost extinct, here are the most beautiful horses in the world. This heavenly horse is also the national emblem Of turkmenistan. This kind of horse is known worldwide for its speed endurance intelligence and Of course its beauty. Akhal-Teke can also adapt to severe climate conditions. Is also one of the oldest horses breed that still exist today.

Any case the ancestor of these breed dated back to horses that live 3000 years ago. The famous historian herodotus even mention this horse.

History says that this breed is a direct descendant of the turkoman horse breed that is now extinct. The akhal teke breed is listed as threatened which is extremely rare with other domestic animals.

This horse is famous for its metallic sheen which is caused by its extremely fine hairs. It is always looks super glossy and shiny no matter what color. The younger ancestors of akhal teke were golden but now it is one of the few horse breeds that has a wide range of colors.

Their 3 main colors are black, bay and red. The stallions of this breed have influenced many breeds and were often given to heads of states and important people in foreign lands. The Sorraia is a rare breed of horse indigenous to the portion of the Iberian peninsula, in the Sorraia River basin, in Portugal. The Sorraia is known for its primitive features, including a convex profile and dun coloring with primitive markings. Concerning its origins, a theory has been advanced by some authors that the Sorraia is a descendant of primitive horses belonging to the naturally occurring wild fauna of Southern Iberia.

Studies are currently ongoing to discover the relationship between the Sorraia and various wild horse types, as well as its relationship with other breeds from the Iberian Peninsula and Northern Africa.

Members of the breed are small, but hardy and well-adapted to harsh conditions. They were occasionally captured and used by native farmers for centuries, and a remnant population of these nearly extinct horses was discovered by a Portuguese zoologist in the early 20th century.

Today, the Sorraia has become the focus of preservation efforts, with European scientists leading the way and enthusiasts from several countries forming projects and establishing herds to assist in the re-establishment of this breed from its current endangered status. Features of the Black Forest Horse include a dark chestnut coat with a flaxen mane and tail, a short head, strong neck, well laid back shoulders, wide croup (hindquarters) and expansive gaits. It stands from 14.2 to 15.3 hands (58 to 63 inches, 147 to 160 cm) and weighs approximately 650 kg. It has very strong hooves and joints. Did you know that Curlies are claimed to be the only hypoallergenic horse breed; most people allergic to horses can handle Curly Horses without suffering any allergic reaction.

The origins of the Curly horse is highly debated in the Curly community, but research is mostly still in progress. Disagreements of the Curly horse’s history result in confusion of what the breed is, and what it should be called. ABCR members prefer “Bashkir Curly” while CSI and ICHO members lean towards “North American Curly”.

The addition or removal of ‘Bashkir’ to the breed name is highly debated. A 1990 study indicated that it is unlikely that the Bashkir horse, which also has a curly coat, is an ancestor.

It is said that Curly horses were documented in Asian artwork as early as 161 AD. Charles Darwin documented curly horses in South America in the early 19th century and the early Sioux Indians regarded curly horses as sacred mounts for chiefs and medicine men. Native American artwork shows Curlies carrying warriors in the Battle of Little Bighorn.

Another theory is that the origin of the breed is Iberian. It has been noted that foals of cross bred horses have the curly hair. This suggests that the curly gene is dominant.

There are multiple theories for how the American Curly developed. The Curly horse was first documented in Eureka, Nevada in the early 20th century by rancher John Damele and his sons. While Mustangswere a common sight, curly coated horses were unusual. Years later, the Dameles managed to catch one, broke it to ride and sold it, thus starting their relationship with the breed. In 1932, an unusually harsh winter hit the area, and come spring the only horses that could be found were the Curlies.

This evidence of hardiness was noted by the Damele family, and they decided they should include more of these horses in their herd. After another harsh winter in 1951/52, the Dameles started to get serious about breeding these horses. They went out and found their foundation stallion, a two-year-old chestnut in one of the mustang herds.

They called him Copper D. The Dameles didn’t care much for keeping the breed ‘pure’, and wanting to improve their horses, added some other blood to their herd. Among the stallions introduced were a Morgan, Ruby Red King AMHR 26101 and an Arabian, Nevada Red AHR 18125. These two stallions created many offspring for the Dameles, and are in hundreds of Curly horses’ pedigrees today. Did you know that Most Falabellas are considered intelligent and easily trainable.

The Falabella miniature horse is one of the smallest breeds of horse in the world, seldom taller than 8 hands (32 inches, 81 cm) in height at the withers.

The Falabella, despite its size, is not considered a pony, but rather is a miniature horse.
The ancestral stock of the horse of South America descended from horses brought to the western hemisphere by the Spanish of Andalusian and other Iberianbloodlines.

In the southern part of the continent, significant numbers of these horses developed within geographically isolated conditions and by the mid-19th century, there were any number of smaller, inbred animals in the herds of Mapuche Indians of southern Buenos Aires province in Argentina. The Falabella horse was originally developed in Argentina from local horses of Criollo stock, beginning in 1868 with the breeding program of Patrick Newtall.

When Newtall died, the herd and breeding methods were passed to Newtall’s son-in-law, Juan Falabella. Juan added additional bloodlines, including the Welsh Pony, Shetland pony, and small Thoroughbreds. With considerable inbreeding, he was able to gain consistently small size within the herd.

Beginning in the 1940s, a descendant, Julio C. Falabella, created a formal breed registry, the Establecimientos Falabella, now the Asociación de Criadores de Caballos Falabella (Falabella Horse Breeders Association), and worked to standardize the breed to reach a consistent height, first achieving an average size of under 100 cm (40 in) Later breeders developed the modern standard, a horse breed that averaged approximately 76 cm (30 in) in height.

The first Falabella horses were imported to the United States In 1962, when John Aleno of Argentina sold 12 Falabella stallions to the Regina Winery in Etiwanda, California. Aleno had purchased the stallions from Julio Falabella. The winery used them to drive a small stagecoach in parades to promote their wine. Most of the Falabella miniature horses in the United States today descend from these 12 stallions. The Irish Cob, also known as the Gypsy Cob, Gypsy Horse or Gypsy Vanner, is a type or breed of domestic horse from the British Isles. It is a small, solidly-built horse of cob conformation and is often, but not always, piebald or skewbald; it is particularly associated with the Pavee and Romani travelling peoples of Britain and Ireland.

From about 1850 travelling people in the British Isles began to use a distinct type of horse to pull their vardos, the caravans in which they had just begun to live and travel.

The colour and look of the breed were refined in the years after the Second World War. Horses of this type were first exported to the United States in 1996. Did you know that in 1994, the organization officially changed its name to the American Cream Draft Horse Association (ACDHA).

The American Cream Draft is a rare draft horse breed, the only such breed developed in the United States that is still in existence.

It is recognized by its cream color, known as “gold champagne”, produced by the action of the champagne gene upon a chestnut base color, and by its amber eyes, also characteristic of the gene; the only other color found in the breed is chestnut.

Like several other breeds of draft horses, the American Cream is at risk for the autosomal recessivegenetic disease junctional epidermolysis bullosa.

The breed was developed in Iowa during the early 20th century, beginning with a cream-colored mare named Old Granny. The Great Depression threatened the breed’s existence, but several breeders worked to improve the color and type of the breed, and in 1944 a breed registry was formed.

The mechanization of farmingin the mid-20th century led to a decrease in the breed’s population and the registry became inactive for several decades. It was reactivated in 1982 and population numbers have slowly grown since then.

However, population numbers are still considered critical by The Livestock Conservancy and the Equus Survival Trust. The Knabstrupper or Knabstrup is a Danish breed of horse with an unusual range of coat coloration.

The spotted coat is caused by a genetic mechanism called the Leopard complex. The spotted color patterns common in the Knabstrupper are seen in other breeds, such as the Appaloosa horse, though the two breeds developed independently of one another. The breed generally has either warmblood or Baroque horse conformation.

Some Knabstruppers are born with solid colors, such as bay or chestnut. The Knabstrupper breed was first established in 1812 in Denmark.

A chestnut mare with leopard complex blanket markings was bred to a solid-colored stallion, producing a colt with dramatic spotting. The mare and her son were each bred to many other horses, producing many offspring with spotting and establishing the Knabstrupper as a breed.

This breed was once very popular, but later was crossbred with other horses and it is not certain if any purebreds from this breed remain.

They do well in dressage and show jumping, and are used in general riding, as carriage horses and as circus horses. In 1971, three Appaloosa stallions were imported to Denmark to add new blood to the Knabstrupper breed.