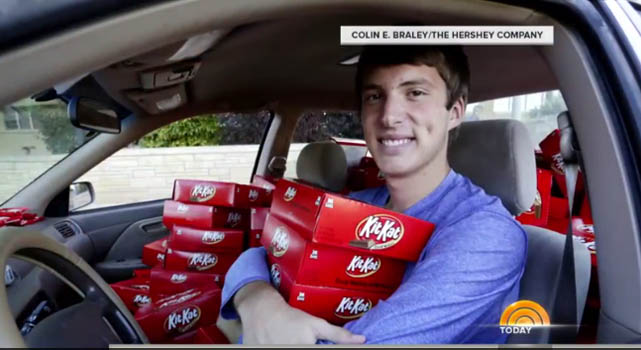 Student’s car gets filled with thousands of KitKat after a thief stole his chocolate bar
Ron Leyba
1.9k
SHARES
FacebookTwitter

SWEET JUSTICE! This is how some netizens described the one of a kind experience of a college student after the story of his stolen Kit Kat bar went viral online.

After leaving his vehicle parked for few minutes, Hunter Jobbins came back to find that his KitKat bar was stolen. He found an apology note (written in a napkin) inside his car from the person who stole his chocolate-covered wafer treat and it reads:

“Saw Kit Kat in your cup holder. I love Kit Kats so I checked your door and it was unlocked. Did not take anything other than the Kit Kat. I am sorry and hungry.”

“I thought about it for a little bit, and I thought, ‘I think a few friends might think this is funny too, so I’m just going to put it on Twitter and see if anybody thinks this is as funny as I do,’” he said.

Left my car for maybe 15 minutes in front of the dorms and I come back to this. College man pic.twitter.com/KlDx5BtXLX

Jobbins tweeted the apology letter that quickly went viral after few hours. It reached over a hundreds of thousands of retweets and almost five hundred thousand favorites, enough to reach concerned citizens and authorities. What’s more interesting is that Kit Kat themselves noticed and quickly responded to his situation.

Who steals someones Kit Kat?! WHO DOES THAT?! Shoot us a DM and we'll replace it for you 🍫

Kit Kat and Jobbins exchanged few direct messages and both parties came up with a good solution to solve the case,

“Kit Kat reached out to me and said they wanted to send me some replacements,” Jobbins told USA TODAY College. “So I got a box in the mail with a card saying ‘Saw your Kit Kat got stolen, hopefully this makes up for it.’ It was really nice of them to do that.”

And after just four days, the sweet justice was served!  Kit Kat filled Jobbins’ car with around 6,500 chocolate bars!

And to celebrate this momentous moment, Jobbins handed out free Kit Kat bars to his friends and peers at Kansas State University.

Jobbins is truly overwhelmed by the attention he got and the effort that Kit Kat made to replace his stolen chocolate bar. But for him, it’s not yet enough, not until he finds out who took the Kit Kat from his car.

As of this moment, that Kit Kat thief is still at large. But for sure, he or she wanna come out right now and say that he paved the way for Jobbins to get this kind of popularity and that vast supply of sugar and chocolate induced wafer bars.