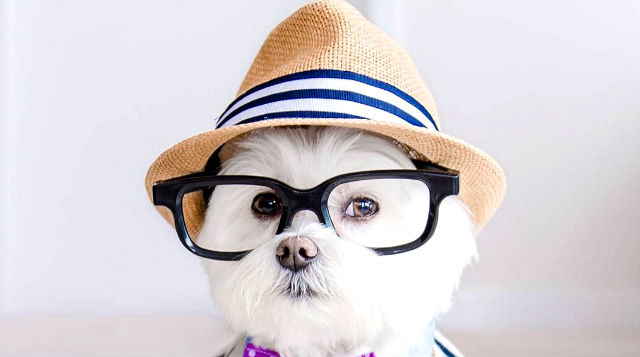 Toby is a Maltese pup who took Instagram (IG) and the internet by storm, going viral with adorable posts ‘modeling’ dog clothes and adorable glasses.

Going by the handle of “Toby_LittleDude” on IG, the pooch now has over 84.2k followers!

It seems that this tiny pup has become a celebrity.

He has even appeared in several commercials for a number of brands, including Dyson, Sudio Sweden, and Daniel Wellington.

In most of his photos, this adorable pup is sporting his signature ‘black rimmed glasses’ look.

According to his owner, Joyce Chen of Vancouver, Canada, Toby’s modeling career began one sunny day while they were hanging out at Starbucks.

With the dog facing her on the patio, she suddenly had an idea of placing her sunglasses on him.

She was delighted to see that he did not even try to shake it off his face.

So, she swiftly snapped a photo of the dog still wearing her sunglasses, later sharing it on social media.

Most of the comments on the post were positive, urging her to take more photos of her pooch.

After taking a number of fun shots with Toby, Joyce realized that he enjoys photo shoots and seems to be a natural in front of the camera.

So, she took more photos and created an IG account for him. The account took off and the pup became a viral hit!

He is dubbed as the “Hipster Dude with Attitude”. Joyce revealed, “We get lots of comments from people saying how much they love Toby’s photographs and sense of humor.”

Toby’s proud owner also revealed, “He enjoys photo shoots on the beach the most. He absolutely loves it and one of his best moves is running towards me while I snap some great action shots.”

“He can be quite confident, independent and serious but he is also very sensitive and affectionate too- especially when Havarti cheese treats are being given out,” she added.

But will Toby take on a full modeling career in the future? Apparently, the answer is not yet sure.

“…But Toby is the boss so I’m going to leave it to him to decide what he wants to do in the future,” answered Joyce.

“For the time being, we’re extremely happy to continue creating quality and fun content to share with all his fans.”