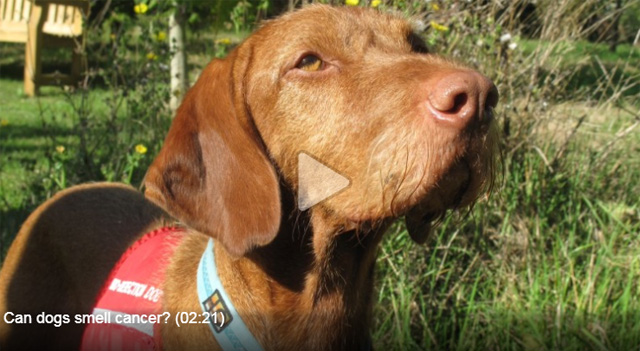 We all do know that dogs are now being utilized in the field of health and medicine. According to numerous research and studies, dogs have become an effective “assistant” in terms of detecting certain medical conditions and disease.

And just recently, a group of researchers that specializes in dog’s smelling capability revealed that dogs can also detect cancer with 95% of accuracy. Thanks to the 300 million sensors at their noses (compared to a human’s 5 million), dogs can sniff out cancer smell at its early stage giving humans a higher chance of defeating the deadly disease.

One of the dogs that can detect cancer with high accuracy is Lucy, a cross between a Labrador retriever and Irish water spaniel. Owners of Lucy said that when she failed certain exercises to become a guide dog, they decided to train her for something far more extraordinary. They trained her to sniff out cancer cells (bladder, kidney and prostate) at its early stages.

And after 7 long years, Lucy has become an expert in sniffing out such deadly health condition. Over the years, she has been able to detect cancer with around 95% of accuracy, better than some lab tests that are used to diagnose cancer at its early form.

Now, Lucy is a vital part of one of the largest clinical trials of canine cancer detection. It’s spearheaded by a British organization called Medical Detection Dogs that currently has eight dogs that sniff urine samples from National Health Service patients to see whether they can detect who has cancer and who doesn’t.

The CEO of Medical Detection Dogs, Claire Guest, experienced this amazing skill of dogs personally. Her fox red Labrador, Daisy, detected her breast cancer years ago before It can even give her symptoms physically.

“She kept staring at me and lunging into my chest. It led me to find a lump,” Guest remembers.

The tumor was so deep in her breast and if not for Daisy’s heroic detection, the cancer cells would have been very advanced before she can felt it herself.

“Had it not been drawn to my attention by Daisy, I’m told my prognosis would have been very poor,” she said.

The dog’s “smelling prowess” is what makes them very effective and crucial in the medical field nowadays. Unlike humans, dogs have a second smelling device at the back of their nose called Jacobson’s organ. This organ allows trained dogs to detect cancer’s unique odors called volatile organic compounds.

Watch this terrifying video of a sea lion pulling a girl underwater, so scary!
16 Funny Cat Posts on Tumblr are taking over Internet for some time now