10 of the World’s Most Bizarre Traditions & Culture Practices

Ancient tradition may part or nonetheless buried within history books are somehow still in effect in the lives of many places around the world. Some may present barbaric or evil and some may be a product of social politics in ancient or not so distant past.

So here’s the top 10 lists of the most bizarre traditions or culture practice around the world. (Warning: Contains adult material.) 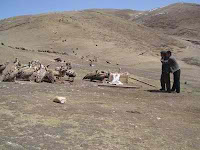 Sky burial or ritual dissection was once a common practice in Tibet. A human corpse is cut into small pieces and placed on a mountaintop, exposing it to the elements and animals – especially to birds of prey. In one account, the leading mok cut off the limbs and hacked the body to pieces, handing each part to his assistants, who used rocks to pound the flesh and bones together to a pulp, which they mixed with tsampa (barley flour with tea and yak butter or milk) before the vultures were summoned to eat.

In several accounts, the flesh was stripped from the bones and given to vultures without further preparation; the bones then were broken up with sledgehammers, and usually mixed with tsampa before being given to the vultures. In another account, vultures were given the whole body. When only the bones remained, they were broken up with mallets, ground with tsampa, and given to crows and hawks that had waited until the vultures had departed.
The Communist government of China outlawed it in the 1960s so it was nearly a lost tradition, but they legalised it again in the 1980s.

Sokushinbutsu were Buddhist monks or priests who allegedly caused their own deaths in a way that resulted in their being mummified. This practice reportedly took place almost exclusively in northern Japan around the Yamagata Prefecture. Between 16 and 24 such mummifications have been discovered.

For three years the priests would eat a special diet consisting only of nuts and seeds, while taking part in a regimen of rigorous physical activity that stripped them of their body fat. They then ate only bark and roots for another three years and began drinking a poisonous tea made from the sap of the Urushi tree, normally used to lacquer bowls. This caused vomiting and a rapid loss of bodily fluids, and most importantly, it killed off any maggots that might cause the body to decay after death. Finally, a self-mummifying monk would lock himself in a stone tomb barely larger than his body, where he would not move from the lotus position. His only connection to the outside world was an air tube and a bell. Each day he rang a bell to let those outside know that he was still alive. When the bell stopped ringing, the tube was removed and the tomb sealed. You can read more about this practice here.

Sati was a Hindu funeral custom, now very rare and a serious criminal act in India, in which the dead man’s widow would throw herself on her husband’s funeral pyre in order to commit suicide. The act of sati was supposed to take place voluntarily, and from the existing accounts, most of them were indeed voluntary. The act may have been expected of widows in some communities. The extent to which any social pressures or expectations should be considered as compulsion has been the matter of much debate in modern times. It is frequently stated that a widow could expect little of life after her husband’s death, especially if she was childless. However, there were also instances where the wish of the widow to commit sati was not welcomed by others, and where efforts were made to prevent the death.

Footbinding was a custom practised on young females for approximately one thousand years in China, beginning in the 10th century and ending in the early 20th century. In Chinese foot binding, young girls’ feet, usually at age 6 but often earlier, were wrapped in tight bandages so that they could not grow and develop normally; they would, instead, break and become highly deformed, not growing past 4-6 inches (10-15 cm). Today, it is a prominent cause of disability among some elderly Chinese women.

First, each foot would be soaked in a warm mixture of herbs and animal blood. This concoction caused any necrotised flesh to fall off. Then her toenails were cut back as far as possible to prevent ingrowth and subsequent infections. To prepare her for what was to come next the girl’s feet were delicately massaged. Silk or cotton bandages, ten feet long and two inches wide, were prepared by soaking in the same blood and herb mix as before. Each of the toes were then broken and wrapped in the wet bandages, which would constrict when drying, and pulled tightly downwards toward the heel. There may have been deep cuts made in the sole to facilitate this. You can read more about the terrible practice of foot binding here. 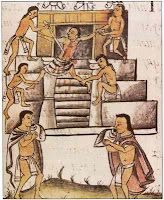 Human sacrifice is the act of killing a human being for the purposes of making an offering to a deity or other, normally supernatural, power. It was practiced in many ancient cultures. The practice has varied between different cultures, with some like the Mayans and Aztecs being notorious for their ritual killings, while others have looked down on the practice as primitive. Victims were ritually killed in a manner that was supposed to please or appease gods or spirits. Victims ranged from prisoners to infants to Vestal Virgins, who suffered such fates as burning, beheading and being buried alive.

Over time human sacrifice has become less common around the world, and sacrifices are now very rare. Most religions condemn the practice and present-day laws generally treat it as a criminal matter. Nonetheless it is still occasionally seen today, especially in the least developed areas of the world where traditional beliefs persist.

Seppuku (Hara-Kiri) was a key part of bushido, the code of the samurai warriors; it was used by warriors to avoid falling into enemy hands, and to attenuate shame. Samurai could also be ordered by their daimyo (feudal lords) to commit seppuku. Later, disgraced warriors were sometimes allowed to commit seppuku rather than be executed in the normal manner. Since the main point of the act was to restore or protect one’s honor as a warrior, those who did not belong to the samurai caste were never ordered or expected to commit seppuku. Samurai women could only commit the act with permission.

A Samurai was bathed, dressed in white robes, fed his favorite meal, and when he was finished, his instrument was placed on his plate. Dressed ceremonially, with his sword placed in front of him and sometimes seated on special cloths, the warrior would prepare for death by writing a death poem. With his selected attendant (kaishakunin, his second) standing by, he would open his kimono (clothing), take up his tantō (knife) and plunge it into his abdomen, making a left-to-right cut. The kaishakunin would then perform daki-kubi, a cut in which the warrior was all but decapitated (a slight band of flesh is left attaching the head to the body). 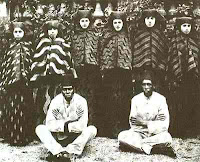 The photograph here shows a group of concubines standing behind their protectors (usually Eunuchs). Concubinage is the state of a woman or youth in an ongoing, quasi-matrimonial relationship with a man of higher social status. Typically, the man has an official wife in addition to one or more concubines. Concubines have limited rights of support from the man, and their offspring are publicly acknowledged as the man’s children, albeit of lower status than children born by the official wife or wives.

Historically, concubinage was frequently voluntary (by the girl and/or her family’s arrangement), as it provided a measure of economic security for the woman involved. Involuntary, or servile, concubinage sometimes involves sexual slavery of one member of the relationship, typically the woman.

First off, in case you are confused, the photograph above is of a male Eunich. A eunuch is a castrated man; the term usually refers to those castrated in order to perform a specific social function, as was common in many societies of the past. In ancient China castration was both a traditional punishment (until the Sui Dynasty) and a means of gaining employment in the Imperial service. At the end of the Ming Dynasty there were 70,000 eunuchs in the Imperial palace. The value of such employment—certain eunuchs gained immense power that may have superseded that of the prime ministers—was such that self-castration had to be made illegal. The number of eunuchs in Imperial employ had fallen to 470 in 1912, when their employment ceased
Eunuchs castrated before puberty were also valued and trained in several cultures for their exceptional voices, which retained a childlike and other-worldly flexibility and treble pitch. Such eunuchs were known as castrati. Unfortunately the choice had to be made at an age when the boy would not yet be able to consciously choose whether to sacrifice his sexual potency, and there was no guarantee that the voice would remain of musical excellence after the operation.

As practised from the 15th to 20th centuries in Western societies, a duel was a consensual fight between two people, with matched deadly weapons, in accordance with rules explicitly or implicitly agreed upon, over a point of honor, usually accompanied by a trusted representative (who might themselves fight), and in contravention of the law.

The duel usually developed out of the desire of one party (the challenger) to redress a perceived insult to his honor. The goal of the duel was not so much to kill the opponent as to gain “satisfaction,” i.e., to restore one’s honor by demonstrating a willingness to risk one’s life for it.

Duels could be fought with some sort of sword or, from the 18th Century on, with pistols. For this end special sets of duelling pistols were crafted for the wealthiest of noblemen. After the offence, whether real or imagined, the offended party would demand “satisfaction” from the offender, signalling this demand with an inescapably insulting gesture, such as throwing the glove before him, hence the phrase “throwing down the gauntlet”.

The full traditions of the Geisha have now been replaced with a modern system. Once Geisha were plentiful in number. In 1900s, there were over 25,000 geisha. In the early 1930s, there were 80,000 geisha. Most geisha were in Kyoto, the old capital city of Japan. Nowadays, there are less than 10,000 geisha left. In Tokyo, there are only 100 geisha left. However, true geisha are much more rare. Modern geisha are not bought from poor families and brought into the geisha house as children. Becoming a geisha is now entirely voluntary, and women who are not the children of geisha can now become geisha. However the training remains as rigourous as before. Young girls have to be very committed to learn the art of traditional Japanese dancing, singing, music, and much more.

Traditional Geisha did not offer the services of prostitution, though some modern ones are rumoured to.