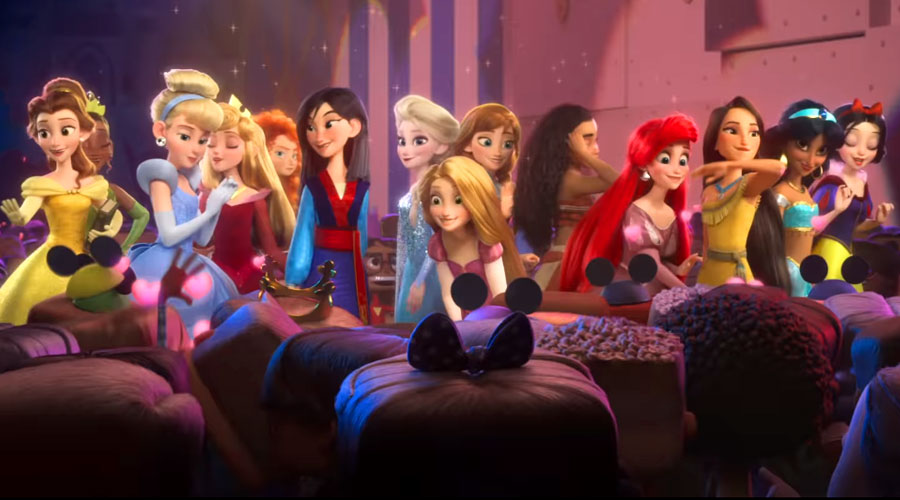 Wreck It Ralph 2 trailer: Disney princesses in the stage

Here are top 10 lists of some interesting facts about some of the Disney Princess films.

You may notice in all Disney Princess merchandise, when pictured together, the princesses don’t acknowledge one another — they’re always looking away from one another or directly at the camera.

Apparently Roy Disney, nephew to Walt Disney, was against the mass marketing of the Disney Princesses outside of their own stories. Eventually, Roy consented as long as they weren’t aware of each other. Although Pocohontas’ age was not mentioned in the film she is thought to have been around 17.

In reality, Pocahontas met John Smith, aged around 12 although her exact date of birth is unknown. She is thought to have died when she was just 21. Rapunzel’s hair is reportedly 70ft long and was created by a team of more than 30 animators and software engineers were assigned to the task of animating it.

4 – The Princess and The Frog In The Princess and The Frog, there are various tributes to previous films. During the song “Down in New Orleans”, the carpet from Aladdin is being shaken up on a balcony and Mama Odie comes across the lamp from Aladdin. A Mardi Gras parade float is modeled after King Triton from The Little Mermaid. He had not had a hit film since Snow White and Cinderella cost nearly $3,000,000 to make. To save money when animating the pumpkin coach, the animators drew the coach to float on air so that they would not have to animate the turning wheels. Thankfully it was a huge success. In The Princess and The Frog the star Ray calls “Evangeline” is in fact the planet Venus. Venus is known as the Roman goddess of love.

In Sleeping Beauty a flame thrower was used to create the dragon breath sound effect for the climax of the movie (I hope they did this outside!). Castanets were used for the sound of its snapping jaws. We all know Robin Williams’ talent for talking. In fact, in the first scene from Aladdin it was totally unscripted. Unfortunately, because Robin Williams ad-libbed so many of his lines, the script was turned down for a Best Adapted Screenplay Academy Award nomination. In Snow White, Dopey was originally meant to have a voice. They made him mute when they couldn’t find a suitable voice. In the Little Mermaid, Sebastian the Crab’s full name is Horatio Thelonius Ignatius Crustatious Sebastian. Quite a mouthful!