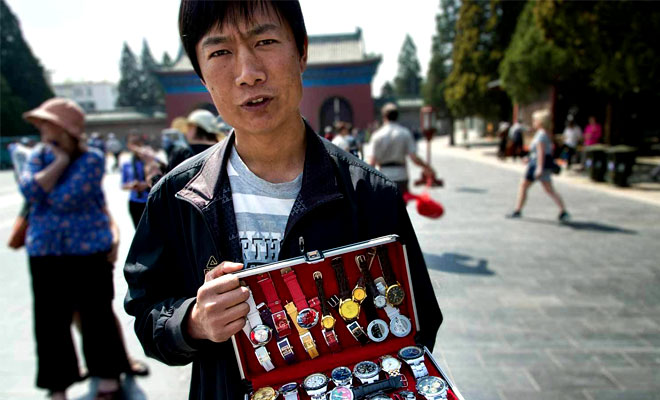 10 of the Craziest Chinese Fakes and Counterfeits

There’s this running joke, “God made the heaven and the earth…and everything else is made in China.” Of course, that is not true but it is actually quite close to the truth, in many aspects.

China is well known for its fakes and counterfeits – whatever thing or product is available in any part of the world, you can trust the Chinese to produce a counterfeit sooner or later.

The Chinese have the knack of counterfeiting just about everything imaginable, including designer bags and clothes of Western brands, top gadget and electronic brands, restaurant brands and names, cars and motorcycles, etc.

But they actually go beyond just these consumer items.

We’ve rounded here the top 10 most outrageous Chinese fakes and counterfeits we found on the web. For example, according to Cracked.com, a Chinese company was able to copy the entire NEC company – everything from business cards to its products to detailed production plans.

When the fake NEC was discovered, investigators were even more shocked to learn that it operates more than 50 factories across Taiwan and China. Whoa! How do Chinese counterfeiters sell their fake designer clothes, bags, and other fashion items, anyway? Simple! Create a fake brand outlet, of course.

The problem here is that the brand outlet appears to be quite strange. An example would be the Dolce & Banana store somewhere in China. Ooops! Diners enjoy eating at well-known restaurant chains. Would you believe that the Chinese also managed to create counterfeit restaurants as well? There’s a Bucksstar Coffee, KLG (for KFC), etc. China is known for creating fake cars. What’s quite alarming (or awesome!) is that they even manage to create vehicles that look like very expensive cars such as Lamborghini and Rolls Royce, then sell these at cheap prices! Jibaozhai Museum in China had the audacity of exhibiting more than 40,000 fake exhibits! After the museum was shut down, some of the staff tried to downplay the scandal by saying they actually had 80 authentic pieces on display! Why would anyone create fake fossils, anyway? Aside from being able to sell it to museums like Jibaozhai Museum, fake fossils can also be sold to private collectors for a hefty sum.

For example, a fake rat fossil actually raked in $3,000 on eBay. On Neatorama, it was revealed that there are Chinese companies who pay Caucasian guys to ‘lead’ their company. However, the powers of these fake owners are actually limited to just a few appearances, including during Christmas parties or simply to be the ‘face’ of the company.


As if faking phones is not enough, in China you can also find fake iStores selling iFakes – fake iPhone products.

The fake stores were accidentally uncovered by a blogger who was amazed at how everything about the store looked and felt authentic. What’s crazier is that the store employees actually thought they were really working for Apple! In a bid to create beautiful cities of great renown, many Chinese local governments commissioned artists to recreate the world’s top monuments and build planned cities. The result? Beautiful cities and monuments that look out of place in the Chinese landscape.

Of course, these counterfeit cities actually looked amazing yet this is counterfeiting in the highest form.

Examples of these fakes include the English town of Thames, the UNESCO World Heritage site Austrian village of Hallstatt, the Leaning of Pisa in Beijing, Eiffel Tower, the London Bridge in Suzhou, the canaled city of Venice, the US capitol building, and the Stonehenge. Of all the alarming fakes in China, I should say the fake food is the craziest and most alarming. After all, these fake food are made to appear real and are, then, consumed by the unsuspecting people.

Some of these are fake beef meat made from rat, fake burger filling made from cardboard, fake walnuts made from cement, fake cabbage made from chemicals, and fake eggs made from starch and chemicals.