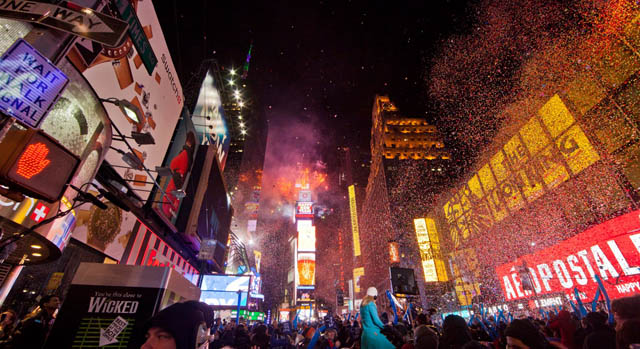 There are lots of ways to celebrate the New Year’s Eve and welcome the fresh 365 days with a bang. Some families dine in together as soon as the 12 AM of January 1 strikes. some lights up their fireworks to cast away the bad luck.

The way people celebrate and embrace the New Year differs in each and every country worldwide. If you wanted to know what the other nation does in welcoming the fresh brand-new year, read on!

According to the old tradition, the color of the underwear you are wearing during the New Year’s Eve can determine your luck for the upcoming year. Some says that if you wear the red color, you will find your soul mate in the upcoming year.  Yellow should be worn if you wanted more happiness and peace in your life. White if you are wishing for fertility and good health. Offer White Flowers to the Goddess of the Living Ocean – Brazil

In Rio De Janeiro, Brazil, thousands of people wearing white gather together to offer white flowers and gifts to the queen of sea. It is believed that doing this can bring good and positive energy and strength for the brand new year. People toss their offering to the sea while some offers their gifts via makeshift boats hoping that the goddess of the ocean will grant their wishes for the New Year. In Spain, people eats 12 white grapes as the clock hits midnight, signaling the start of a brand new year. The 12 grapes represent the 12 months of the year and should be eaten at each bell strike of the midnight. This Spanish tradition dates back from 1895 and became a “must do” for the Spaniards at their New Year celebration year after year. According to the old beliefs, this tradition will lead to a year of abundance and prosperity. Just like eating the 12 white grapes at midnight (Spain), eating lentils at midnight brings prosperity according to the tradition of Chileans. For Ecuadorians, burning a scarecrow on New Year’s Eve is a surefire way to drive away all the negativity and bad luck of the previous year. Some Ecuadorian also burns photographs that represent the bad luck and negative things that happened in the past year. Bang Bread Against the Wall – Ireland

Banging bread on the wall is a usual thing to do for people of Ireland during New Year’s Eve. For them, it’s an effective way to drive away evil spirits while inviting the positive or good ones as the year starts anew. This yearly, traditional New Year’s Day Dip will surely give you the chills! In Konstanz Germany, people jump into the freezing 6 degree Celsius cold water in Lake Constance as they welcome the brand new year. This old age tradition has been around for quite many years and became a popular event not only for the people of Konstanz but also for tourists and guests visiting their land.