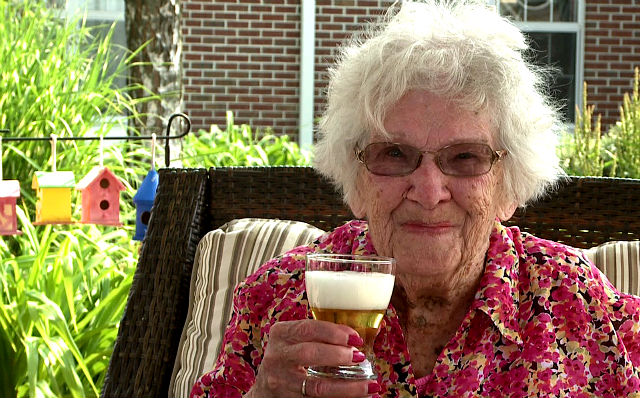 Pauline Spagnola had just celebrated her 100th birthday last June 9 – something that is surely enough to make her story interesting but you’ll be shocked as to why this old woman’s “secret” to longevity has gone viral.

Speaking with a reporter from a Pennsylvania news station, Grandma Pauline candidly revealed the secret to her long life.

It is not proper diet and exercise nor is it about staying healthy by eating only vegetables and shunning meat or whatever healthy diet is supposed to be eaten by humans – it is actually about beer! Lots of it!

Who would have thought that someone who loves beer a lot would live this long?

We have all been told that beer and spirits can be dangerous to our health yet there is this old grandma proving all scientists wrong! No wonder her story quickly went viral.

The video of the interview shared on YouTube also received close to 60,000 views by viewers across the world.

It seems that this grandma’s story is truly something that netizens found incredible.

As you can imagine, Pauline is enjoying her newfound fame. She later told WNEP Newswatch 16, “Oh, I can’t describe it but just wonderful… What do I think? Oh, I think it’s great!”

Pauline loves beer, lots of beer – and believes it is the secret to her long life.

But maybe this would depend on the beer you are drinking? As for Pauline, she revealed that she loves Steigmaier, brewed locally in Wilkes-Barre at Lion Brewery in Pennsylvania where she lives.

Does that mean it was the Steigmaier that made her live so long? Hmmmm. I bet beer sales would go up in the coming weeks after this old woman revealed her secret!

This charming old lady lives at Golden Living Center which probably allows her to have all the booze she wants because it is not doing her any harm, anyway.

The employees even believe Pauline is the living, breathing proof that “you can get older but still never grow up”.

Check out the candid interview on this YouTube video: