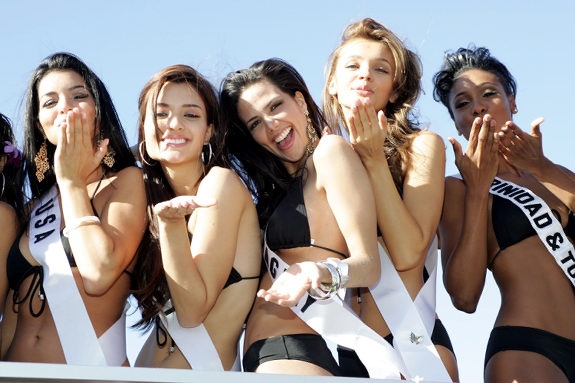 The annual Miss Universe is one of the most awaited beauty contests in the world.

It has become part of the lives of many people and considered as Super Bowl of Beauty.

Every year, 80 plus young, stunning women from different countries is vying for the most coveted Miss Universe crown.

All of them will undergo the preliminary competition when the contestants will probably be judged in swimsuit, evening gown and preliminary interview.

This will determine the Top 16 semifinalists, 15 chosen by judges’ panel and 1 chosen by internet votes.

That number will be further reduced to 10 then advance to the Top 5 as the competition continues.

Who are the powerhouses in Miss Universe?

In the world of pageantry, it has become one of the traditions to most fans to have their predictions or hot picks.

This will happen as soon as Miss Universe is around the corner when the lovely women are done with their official photo shoots and interviews.

Critics’ assessments are based on how the candidates flaunt their bodies in swimwear and how they carry their gowns with elegance on stage during the preliminary competition.

Moreover, their interviews can also be a factor since their personalities and intelligence was being judged on this portion.

Powerhouse countries on the other hand are determined based on the results in the last 60 years.

This includes the countries that have placed in the Miss Universe pageant from its first edition in 1952 to the most recent competition in 2012.

To know this can also be of great help because until now most powerhouse countries still able to make the cut and considered as front-runners in the competition.

Though there were times India did not make it to the semifinals, still this country has produced girls with beauty, elegance and intelligence similar to their Miss Universe winners, Sushmita Sen (1994) and Lara Dutta (2000) that until now wow the whole world by their answers on the final questions.

Oh! recently, Shilpa Singh from India made it to the Top 16 cut in Miss Universe 2012, if I may add.

Things have been gradually changing for Japan’s representatives these past few years. However, their distinct personalities remain.

They have this aura that capture people’s attention.

A very good example to this is Miss Universe 2007 Riyo Mori who had been unforgettable because of that wonderful performance she had during her time. Australia is getting better every year. Since 2008 this country never failed to give us strong contenders that left the fans in awe.

Recently Renae Ayris from Australia possessing a beautiful face and body like a Victoria Secret Angel became the 3rd runner up in Miss Universe 2012.

This fact is enough to scare the front-runners in the competition.

In the recent years, Finland was not able to continue the momentum. Almost 3 decades had passed, since this country became the Miss Universe winner and it was Ann Marie Pohtamo in the year 1975.

Nevertheless, their 2012 representative Sara Chafak might be the good start of their comeback.

She may have failed to be one of the semifinalists but this girl has left her mark by having those strong assets – her fierce looks and sexy body. No doubt, Brazil sent strong and stunning candidates oozing with confidence, because for 2 consecutive years in the pageant arena, it has produced 2 runner ups namely Priscila Machado (Miss Universe 2011 2nd Runner Up) and Gabriela Markus (Miss Universe 2012 4th Runner Up).

This country is indeed in the right track to win in the coming Miss Universe pageant. Sweden we all know is one of the countries that have candidates with mesmerizing beauties and intelligence.

And it was last 2011 when Ronnia Fornstedt, country’s representative won the Miss Photogenic Universe 2011. Their signature catwalks and charm contribute to their advantages.

Will Philippines can dominate again the next year’s Miss Universe?

Their strong catwalks on the ramp with bodies that gave the real “sexy” meaning plus their alluring looks have become their greatest advantages in the competition.

To add, even Bodine Koehler did not make it the Top 16 cut in the recent concluded Miss Universe 2012, but she was one of the hot picks of pageant fanatics.

Venezuela is one of the countries overlooked by most fanatics and critics because of its consistent record of accomplishment in the pageant.

It remains one of the top favorites to win the crown because of its winning final and preliminary performance the last few years.

In addition, it is only country that won back-to-back title in the history of Miss Universe and it happened last 2008 and 2009 when both Dayana Mendoza and Stefania Fernandez managed to outdo other beauties. Darkhorse, smart, and competitive, these are few words that best describe USA’s representatives.

When it comes to beauty-and-performance wise candidates, USA has that.

Certainly, this country has been one of the strongest contenders to win the crown every year.

The crown of Miss Universe has changed nine times over the course of its 65-year history. The first crown, the Romanov Imperial nuptial crown, was previously owned by the now-defunct Russian monarchy. It was used by the first Miss Universe in 1952.