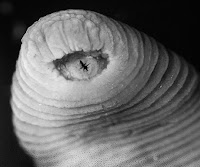 For these reasons and more, the bizarre bloodsucker is an editors’ pick for one of the oddest new species of 2010. 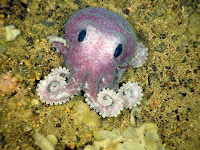 This unidentified purple octopus is one of 11 potentially new species found during a July deep-sea expedition off Canada’s Atlantic coast.

The 20-day expedition aimed to uncover relationships between cold-water coral and other bottom-dwelling creatures in a pristine yet “alien” environment, according to the researchers’ blog.

This tube-nosed fruit bat—which became a Web sensation as “Yoda bat”—is just one of the roughly 200 species encountered during two scientific expeditions to Papua New Guinea in 2009, scientists announced in October.

Though seen on previous expeditions, the bat has yet to be formally documented as a new species, or even named. Like other fruit bats, though, it disperses seeds from the fruit in its diet, perhaps making the flying mammal crucial to its tropical rain forest ecosystem.

Boasting a tail three times the length of its head, the newly described long-tailed slug is found only in the high mountains of the Malaysian part of Borneo, scientists said in April.

The new species shoots its mate with “love darts” made of calcium carbonate and spiked with hormones—hence its nickname: ninja slug. Scientists believe this Cupid-like behavior may increase reproductive success. 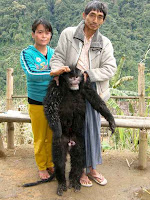 A new monkey species in Myanmar is so snub-nosed that rainfall is said to makes it sneeze—but that’s apparently the least of its problems, conservationists announced in October.

The only scientifically observed specimen (pictured) had been killed by local hunters the time researchers found it—and was eaten soon after.

A new species of armored, wood-eating catfish (pictured underwater) found in the Amazon rain forest feeds on a fallen tree in the Santa Ana River in Peru in 2006.

Other so-called suckermouth armored catfish species use their unique teeth to scrape organic material from the surfaces of submerged wood. But the new, as yet unnamed, species is among the dozen or so catfish species known to actually ingest wood, National Geographic News reported in September. 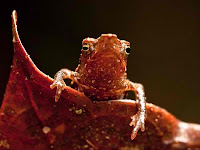 You could call it the surprise du jour: A popular food on Vietnamese menus has turned out to be a lizard previously unknown to science, scientists said in November.

What’s more, the newfound Leiolepis ngovantrii is no run-the-mill reptile—the all-female species reproduces via cloning, without the need for male lizards.

Squid? Worm? Initially, this new species—with bristle-based “paddles” for swimming and tentacles on its head—so perplexed Census of Marine Life researchers that they threw in the towel and simply called it squidworm, National Geographic News reported in November.

Found via remotely operated vehicle about 1.7 miles (2.8 kilometers) under the Celebes Sea (see map) in 2007, the four-inch-long (ten-centimeter-long) creature turned out to be the first member of a new family in the Polychaeta class of segmented worms.

Using its fins to walk, rather than swim, along the ocean floor in an undated picture, the pink handfish is one of nine newly named species described in a scientific review of the handfish family released in May.

Only four specimens of the elusive four-inch (ten-centimeter) pink handfish have ever been found, and all of those were collected from areas around the city of Hobart (map), on the Australian island of Tasmania.