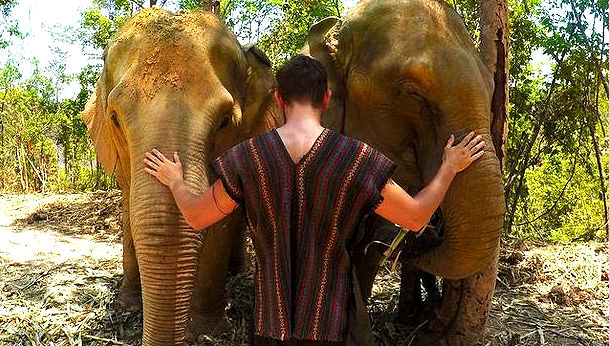 The fact that this is a rare occurrence made it very interesting to many people; thus, it quickly went viral.

The amazing elphie was taken while LeBlanc was on a vacation in Thailand. While in a reserve at on Koh Phangan Island, he and his girlfriend found several elephants which they fed with a basket of bananas worth 50 cents.

As the basket only contained a few bananas, the elephant quickly ate up everything and began to sniff around for more food using its massive trunk.

The sniffing did not just stop at the basket. Pretty soon, the elephant was taking LeBlanc’s GoPro camera by the handle.

Just had an article written about my #elphie (elephant selfie, clever I know) in the Daily Mail and the Mirror UK 💁🏼 UPDATE: It's now everywhere! You can't hide !

Set to take continuous photos, the GoPro camera continued clicking even while it was being held by the elephant – and the now-famous elephant selfie was created.

LeBlanc did not elaborate how he was able to get his camera back; though it was possible the elephant simply lost interest as it did not appear or taste like food.

Now, LeBlanc was proud of the photo; so, he immediately shared it on social media where it quickly gained traction and went viral within hours.

He dubbed it as the world’s first elephant selfie, ever.

“I got the selfie of a lifetime, which I can’t take full credit for,” LeBlanc added.

“Elephants are incredibly intelligent and it definitely makes you wonder if it was a conscious action.”

However, despite it being an amazing elphie, it is not really the first elephant selfie. BBC News reminds us that last year, another elephant selfie had gone viral. It was taken at West Midlands Safari Park, Worcestershire in England, by an elephant who had managed to grab a tourist’s phone.

Travel is temporary, selfies are forever. Had a whale of a time swimming alongside 10 of these gentle giants today!