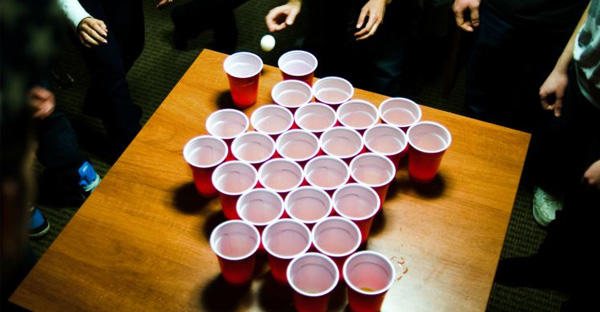 10 of the Most Bizarre & Insanely Fun Drinking Games for Parties

Drink moderately. We have been hearing this advice but I think with today’s featured article, we can set aside this reminder for now.

Why? How can you moderate drinking when you are playing a game where when you lose, you have to drink?

Take note, these games have strict rules and regulations so being drunk is not an excuse if you lose.

By the way, this article is not promoting drinking excessive alcoholic beverages, so please don’t get me wrong.

We’ll be featuring (top lists) some of the fun and weird drinking games for you to play while enjoying drinking with your friends with help from our friends from Flying Dutchman Liquors in Bahamas.

Never Have I Ever (or I Never)

If you want things to get funnier as you drink and get drunk, this game is I strongly suggest.

The game is very simple and also a fun way on how you can tease your friend (by their secrets you already know) and to know a stranger you are drinking with.

Players in a predetermined order will take turn making a statement which starts with “Never Have I ever” or “I Never”.

The player or players who actually have done the mentioned deed will drink. No need for further explanation by the one who admits unless the group wants to know more about the details.

This is your chance to know more about the people you are drinking with.

First, a player should deal the entire deck of cards one card at a time in front of each person sitting around the common area.

The first person to draw one of the kings from the card deck will pick the liquor to be used in the end drink.

Then the second person who will get a king will choose the mixer for the alcohol. The unfortunate third person is forced to drink no matter what it is.

Just a tip, the end king could be placed in front of anyone so be careful in choosing the liquor and mixer. Now let’s talk about a drinking game where a great deal of skill is involved in playing it.

Battleship is a game that requires the players to have fast reflexes and the ability to still strategize and plan.

You need a pitcher full of beer and it should be big enough to hold an empty cup then place the empty cup in the liquid of the pitcher.

Players will take turns in pouring additional beer into the floating cup. There should be a five-second interval before the next player.

The best strategy is to fill the cup as much as possible so that the next person cannot add even a few drops of beer without sinking the cup.

You need a duct tape and 2 40′s of beer for each person in order to play this game. You tape one 40 to each of your hands. The rule is you cannot take them off, you have to drink them all.

This means that if you need to go to the bathroom or answer your cell phone, you either gulp the beers or wet yourself. The main goal of this kind of game is to make people drink a lot of beer fast. If your host or hostess is fine if ever the place gets messy, wet and sticky then try this game.

We all know that roulette is a game of chance, just let the ball roll on the wheel and wait till it stop. This is somewhat similar to beer roulette, here’s how it goes.

On a single table, players will gather cans of beer and a certain player will shake one of the cans vigorously.

The shook can of beer will be placed together with the other cans of beers and it will be shuffled until none of the players know where exactly it is.

Each player will take a can of beer and they will open it at the same time. The unfortunate player ends up getting sprayed and he has to drink the remaining beer in his can. I categorize this game as the “naughty” one. This game is best played by few people. Why? The more people who will join will make the game last longer, the best number of players should be three (3) to five (5).

A player will flip a coin and while the coin is still in the air, he must call heads or tails.

After that you will be given a choice if you will drink a shot or strip one article of your clothing. One more rule of this game is that you cannot sip or strip more than twice in a row.

Quarters is best played with three (3) to six (6) players sitting around a table.

You may use any coin as long as it can have a reference for pointing (some use Washington’s nose or the Eagle’s beak) and to get started you have to spin the quarter/coin and when it stops it will point to the person who will be the first one to start.

A player should bounce the quarter off the table and into the glass, if he succeeded he will choose a person to drink but if he fails his turn is over and the next shooter will proceed. You need a deck of cards to play this game. One should deal out the cards and the person on the left of the dealer will go first.

He should lay down any card or cards with the same face value, then the next person should lay a card equal or with a greater value.

The next person should do the same but if ever he lay the same card as the previous player, he will be skipped and he must drink.

The main goal of this game is to get rid of all your cards. The game is cleared when all players skip or a two is played. If you are the last one who cannot get rid of all the cards then you will be the “asshole” and whenever the “president, vice president and secretary” ask you to drink then you should follow because their ranks are higher than yours.

This (Boxing) game should have four players and you need 2 shot glasses, a stop watch, two dice and of course the beer.

Just like in boxing, there are two players and both of them have their corner men.

These players will roll a dice and whoever scores the lowest will drink the shot then the corner man will refill the empty shot glass for the next roll.

This is a fast paced game, some play it for 3 minute rounds with a 30-second rest between rounds but some play a limited number of rounds to prevent players from vomiting.

By the way, the one who quits or pukes loses the game. Both teams will take turn in throwing the ping pong ball and when the ball lands on the glass of the opposite team, the opposite team should drink the beer and rearrange the remaining glasses close to each other.

The winner will be the team who managed to make the opposing team drink all their drinks. Also, the losing team must drink all the remaining beers of the winning team.