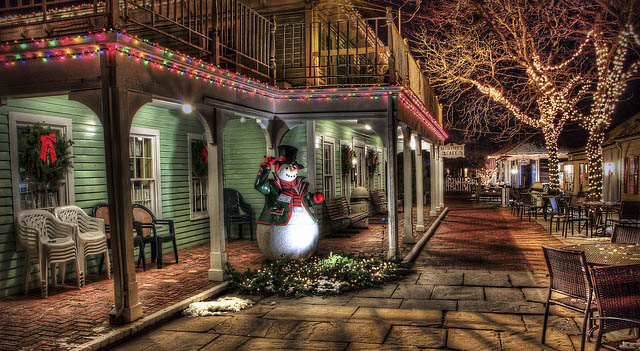 Christmas celebration varies from each and every country, culture and religion. If you live in a Roman Catholic dominated country, pretty sure that you celebrate it by exchanging gifts, attending church mass or service and singing Christmas carols.

But did you know that in some countries, Christmas is celebrated in a very different way? In fact, there’s some group of people who celebrates it by using the sauna on Christmas Eve! Crazy right?

There are some bizarre, odd and weird Christmas traditions around the globe. Some of the most popular ones are listed down below.

If you wanted to get married soon and never spend another Christmas alone (single), then try this tradition from Slovakia. Stand with your back to the door and throw a shoe over your shoulders on Christmas day. If that shoe lands with the toe pointing to the door, then you’ll get hitched before next Christmas hits. If not, then you should try it again next Christmas.

Instead of fir or pine trees, Christians in India uses banana trees and mango trees as their Christmas tree. So instead of seeing pine trees inside an Indian (Christian) home, you’ll see banana or mango trees outside their home lit with bright lights and decors. They sometimes use leaves of banana to decorate their homes for the Christmas season.

If some people cook and eats turkey as part of their Christmas ritual or tradition, Japanese just order the finger lickin’ good KFC. KFC fried chicken is the main dish at Christmas for many Japanese homes. Because of the lack of turkeys and genius marketing done by KFC, their fried chicken become a traditional food during Christmas season. According to sources, there are more than 240,000 barrels of KFC chicken sold during Christmas, five to ten times its normal monthly sales. Japan Christmas = KFC Friend Chickens. People in Finland visit the graves of their relatives and loved ones on Christmas Eve. They light candles and say some prayers in memory of the deceased. At home, they will leave some food on their tables and leave their beds to sleep on the floor so the dead can have a nice meal and a resting place when they decided to visit.

Personally, I find this tradition quite fun and exciting! Before young kids go to bed on Christmas Eve, they will tie one end of a string to their big toe and leave the other end hanging outside their bedroom window. And on Christmas day, before the Early Morning Mass, streets are off-limits to motorized vehicle until 8:00 am to give way to people roller-skating their way to the church. These people will then pull or tug any dangling strings outside a home’s window to wake up the person at the other end of the string.

Christmas trees in Ukraine are decorated differently than the others. If yours are filled with colorful decors and accessories, Ukraine’s Christmas trees has artificial spiders and cobwebs. According to the local folklore, there was once a poor woman who can’t afford to decorate their Christmas tree. One morning, her children saw their tree filled with spiders and cobwebs. And when the first sun light of Christmas morning touched their tree, the cobweb and spiders turned into gold and silver. This gave them great amount of luck thus changing their lives forever. Christmas in Britain involves pudding, and lots of it. People here believe that stirring the pudding mix clockwise while making a wish can make it come true. Earlier version of this tradition include putting a coin the mix and whoever finds it (after pudding is serve) will have a great amount of luck.

In Catalonia, Spain, little statues of famous people defecating is a big part of their Christmas celebration and tradition. Dating way back the 18th century, locals will hide this little statues (caganers) in Christmas Nativity scenes and invite their friends to find it. This caganers symbolizes fertility and prosperity so whoever finds it will get great amount of luck for the coming year.