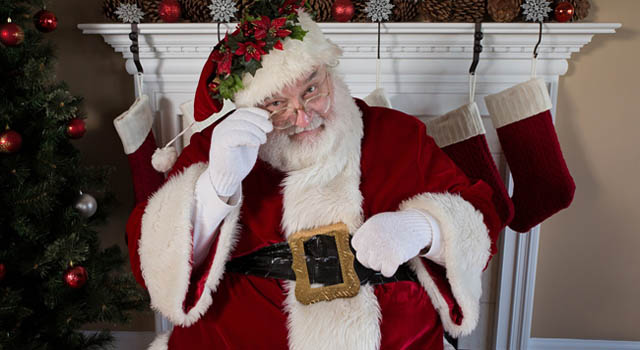 If you think that you already know lots of things about Santa Claus, you’re wrong! Unless you dedicated great amount of time studying Father Christmas, pretty sure that you haven’t heard the below facts and trivia before.

Santa Claus has quite a very interesting past. Some of them sound really bizarre and odd while some others are straight up badass. Without further ado, here’s our list of crazy facts about Santa Claus.

Santa Claus spoke right after he was born.

According to Benjamin Britten’s 1948 St. Nicholas Cantata, in 270 A.D., the baby who would become Saint Nicholas (now Santa Claus) immediately yelled “GOD BE GLORIFIED” right after exiting his mother’s womb. While we can’t really prove that this happened, this is certainly one of those facts about Santa Claus that’s quite eerie.

According to a local folklore, there was a man who had three daughters that he couldn’t marry off, so he decided to sell them into prostitution as soon as they hit their right age. The night before one of this daughter came of age, St. Nicholas tossed a bag of gold through their window. This gave the first daughter the dowry required to get married. The same thing happens with the two other girls, thus, preventing them from being sold into prostitution. Again, according to folklore, when a butcher killed three little kids in his shop in an attempt to sell their meat as ham, St. Nicholas came into action. When he learned about the situation, he immediately came into the scene and resurrected the three kids. Well, no one knows what happened to the butcher or what Santa Claus did to him.

In Belgium and Netherlands, where Santa Claus is known as Sinterklaas, there’s a folklore that says he comes from Spain by steam boat to give gifts to the kids. It was also said that this is where the “naughty or nice” list of kids originated.

Santa Claus in red suit is Coca-Cola’s idea and creation.

Back then, Santa Claus dresses up in any color (suit) he likes – green, blue, brown etc. One of his most popular suits was in color green because this color represents the evergreens.  But in 1931, Coca-Cola issued a successful campaign that featured Santa Claus in Coca-Cola’s brand color – red and white. Because Coca-Cola is a pretty massive company with huge budget on ads and marketing, the red suit become so popular and famous thus locking Santa Claus’ costume in red and white color. When a ship full of wheat docked in the port of Myra during a famine (311-312 CE), St.Nicholas, the Bishop of Myra asked the sailors if they can hand him some wheat that he can give to the poor.

The sailors refused because the Emperor of Constantinople expects a certain weight of wheat so they can’t hand him any even they wanted to. St.Nicholas told them that the weight of wheat won’t change even if they give him some of it. The sailors oblige and handed the Bishop what he needs.

When the ship arrived in Constantinople, sailors were surprised to see that the weight of the wheat they carry didn’t change – even though they gave St. Nicholas enough wheat to feed  the entire city for 2 years. Miracle!

St. Nicholas died in 343 A.D. His remains were buried in Myra where he served as bishop. According to a local folklore, his bones can produce a miraculous clear watery liquid that can help and heal people.

And in the 11th century, group of sailors from Bari took all of his intact bones based on the vision they had of him where he said “,I sure wish someone would take a portion of my bones to Bari for some reason.”

When his bones were entombed at Bari, a clear liquid came out of the tomb. People believe that this is the miraculous liquid that is coming out of his bones. But some scientists say that there’s a scientific explanation for this as Bari is a seaside town and the tomb is below sea level.

Santa Claus is a Marvel superhero.

Yes, you read it right! Santa Claus is also a Marvel character. His powers includes longevity, the ability to fit himself and others through any chimney, the ability to soften even the hardest of hearts, levitate up a chimney, alter the appearance of himself or other objects or beings, change the size of other objects, teleport himself and others across the world, generate snow and determine who has been naughty or nice. And oh, he also once saved the X-Men on Christmas Eve. 8 crazy and weird Christmas traditions around the world
Drake, Jennifer Lopez spotted out together, are they in a relationship?