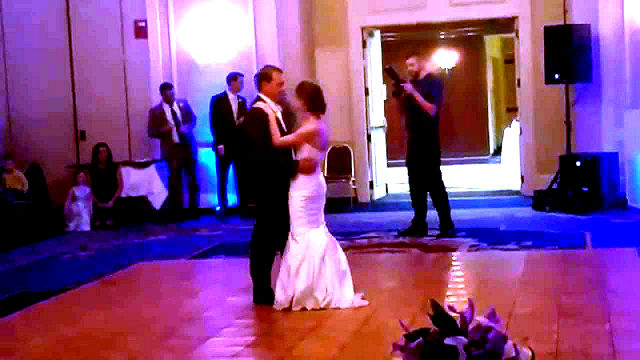 His daughter grew up a tomboy, having more fun with boyish stuff than girlish things – so, during her wedding (to a man, by the way), Jim Mickunas knew that the traditional father-daughter wedding dance is not really suited for them.

At first, Jim appeared to follow tradition by dancing with his daughter to the slow tempo of “What a Wonderful World” by Louis’ Armstrong but he was soon shaking his head and his daughter appeared confused.

A man walked towards the pair and handed each a baseball glove. The confused bride laughed, realizing what her father is doing: To honor her love for sports, her dad is “dancing” with her as they exchanged baseball pitches across that elegant ballroom while an upbeat music was playing.

Daddy Jim was proud of his daughter and even uploaded the video on his own YouTube account, with the following caption:

My daughter has always found her own path. She played Flag football at six. She hated wearing dresses.

She wore a tuxedo to her first communion. She then became an Engineer for the largest automaker in the world when she was 22. I could not imagine having a traditional father daughter dance with her.

That is not what we were or are…So I came up with this. – She had no idea!

After a few pitches, Jim’s new son-in-law cut in and continued the unique “dance” with cool moves of his own. The bride also appeared to be really enjoying this plot twist, throwing pitches with moves that are only hindered by her wedding gown. It was a lovely thing to watch.

It is amazing how Jim was able to find a way to connect with his daughter and her love for sports on one of the most special days of her life – then, connect with his son-in-law as well! No wonder the video quickly went viral…