Road trips are fun and exciting specially when you’ll see what each town and city has to offer. 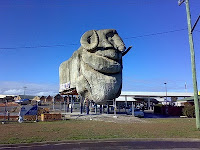 The Big Merino is a 15 metre tall concrete Merino sheep (a type of sheep that is drought tolerant), located in Goulburn, New South Wales, Australia.

Nicknamed “Rambo” by locals, the Big Merino contains a gift shop on the ground floor and a wool display on the second floor.

Visitors can climb to the top and look out through the Merino’s eyes to view the local area.

(At this time, Jan ’08, there is a sign claiming that due to insurance reasons the lookout is closed.)

The Big Merino was officially opened on 20 September 1985.

In 1992 the Hume Highway bypassed Goulburn, which resulted in a loss of 40 busloads of tourists to the Big Merino complex per day.

On 26 May 2007, the Big Merino was moved to a location closer to the Hume Highway to increase visitor numbers and is now located near the freeway interchange at a service station. 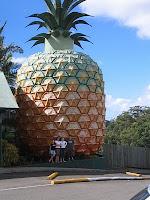 The Big Pineapple is a tourist attraction and working farm situated at Woombye near Nambour, Queensland.

There are rides, tours of pineapple plantations and other agricultural products, shops, restaurants and exhibits for visitors to enjoy.

The Big Pineapple is 16 metres high and was originally opened on the 15th of August 1971.

Entry is free. The attraction went on the market in June 2005.

The Big Pineapple features two rides: One on a Nut Mobile, the other on a small train. 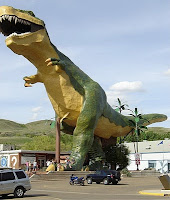 The “World’s Largest Dinosaur” is the name of a model Tyrannosaurus rex located in the town of Drumheller in the Canadian province of Alberta.

Drumheller is a town in the Badlands of east-central Alberta, on the Red Deer River, located 135 kilometres (84 mi) northeast of Calgary.

Drumheller is home to the Royal Tyrrell Museum of Palaeontology. 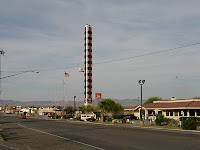 The world’s tallest thermometer is a landmark located in Baker, California, USA.

It is technically an electric sign, rather than a tall thermometer; however, it exists as a tribute to the record 134 degrees Fahrenheit (57 degrees Celsius) recorded in nearby Death Valley on July 10, 1913.

It stands 134 feet tall and is capable of displaying a maximum temperature of 134, both a reference to the temperature record.

The Big Chicken is a Kentucky Fried Chicken restaurant in Marietta, Georgia, which features a 56-foot-tall (17 m) steel-sided structure designed in the appearance of a chicken rising up from the top of the building.

It is located at the city’s biggest intersection of Cobb Parkway (U.S. 41) and Roswell Road (former Georgia 120) and is a well-known landmark in the area.

This 12-ton, 80-foot-tall behemoth was built to withstand hurricane-force winds, and served as a ferris wheel (and a huge advertisement for Uniroyal) at the 1964–65 New York World’s Fair.

In 1998, Uniroyal stabbed the tire with the world’s largest nail. The nail was 11 feet long and 250 pounds.

This was done to promote their puncture-resistant Tiger Paw Nailgard tire.

The big tire withstood the assault and the nail was eventually removed and given to Allen Park, which then put it up for sale on eBay in 2003 to raise money for a local historical society.

The city hoped that someone would pay hundreds of thousands of dollars for the nail, the final price paid by local businessman Ralph Roberts was $3,000 (Roberts lends out the nail for local events). 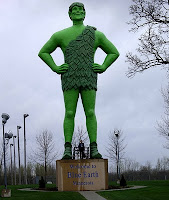 The Jolly Green Giant is a symbol of the Green Giant food company of the United States, appearing as a smiling green-skinned giant wearing a tunic, wreath and boots made of leaves.

In 1973, JGG teamed up with “Little Green Sprout”, the diminutive young green giant.

Created by Leo Burnett, the Giant first appeared in advertisements in 1928; the name originally came from a variety of unusually large pea called the “Green Giant” that the company canned and sold. 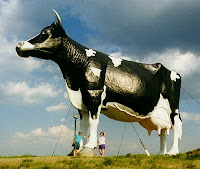 Salem Sue was built in 1974 for $40,000. The project was sponsored by the New Salem Lions Club in honor of the local dairy farming industry.

The statue stands 38 feet high and is 50 feet long.

It sits on School Hill near Interstate 94 off exit 27 S and can be viewed for several miles.

Created by Claes Oldenburg and Coosje van Bruggen, it has been called the “world’s largest rubber stamp”. 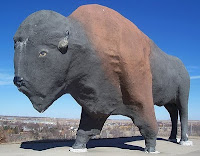 The “World’s Largest Buffalo” is a sculpture of an American Bison located in Jamestown, North Dakota at the Frontier Village.

It was built in 1959 by local businessman Harold Newman. It can be seen from Interstate 94, overlooking the city from above the James River valley.

The statue is a significant tourist draw for Jamestown and the source of its nickname, The Buffalo City.

It was constructed with stucco and cement around a steel beam frame shaped with wire mesh. The final cost of construction was approximately $8500 in 1969; a significant overrun from initial estimates closer to $4600.

The concrete slab that lies under the sculpture was added later and was not included in the initial cost.