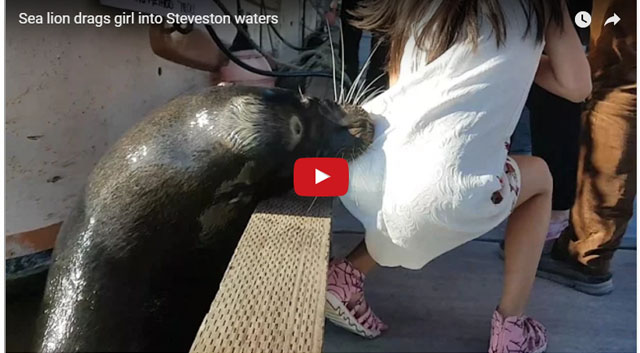 There are lots of sea lion shows around the world. In these shows, sea lions are taught to play balls playfully swim along their trainers and even give sweet kisses to guests and visitors.

And because of these shows, many started to treat them as harmless and friendly water creature.

But what most people don’t know is that sea lions, if not trained properly, can be really harmful.

This terrifying video of a young girl being dragged underwater by a sea lion pretty much proves that these sea animals are capable of hurting people near or around their vision.

The whole event was captured by a college student Michael Fujiwara in Steveston Harbour in Richmod, British Columbia.

In this video, the massive sea lion can be seen swimming and grabbing bread that someone threw in the water.

The sea lion then hops up from the water and gotten really close to a little girl kneeling near the dock’s edge.

All of a sudden, it leaps from the water and immediately grabbed the girl’s dress as it drags her underwater.

A quick thinking man immediately dives into the water and pulls the poor girl to safety, unharmed.

It was a pretty scary and shocking moment for the people who witnessed the said incident.

“They were pretty shaken up, her family were just in shock.” Fujiwara said in one interview.

“My first reaction to the video is just how stupid some people can be to not treat wildlife with proper respect,” Trites said.

“This was a male California sea lion. They are huge animals. They are not circus performers. They’re not trained to be next to people.”

The general manager of the Steveston Harbour Authority, Bob Baziuk said that they’ve been warning guests and visitors NOT to feed animals.

It was on their rules and regulations for years already.

“It’s not Sea World, it’s a place where you buy fish,” Baziuk said. “If you feed the animals like this you’re asking for trouble.

“Don’t feed the wild animals! People were feeding that animal, the feeding stops, the animal then gave what we would call an aggressive precursor where he kind of jumped out of the water gave a little huff and a lunge, and then instead of people backing away, people actually got closer which set the animal up for a perfect grab and bite and pull into the water.”

The expert said that the whole incident could have been prevented if people only kept their distance.

Good thing that the poor girl wasn’t bitten or drowned to death by the sea lion.

However, authorities hope that this scary incident will serve as a warning or a lesson on how to approach these kind of sea creature.

This parrot named after Albert Einstein is crazy incredible, watch his video!
This cute dog can detect bladder, kidney and prostate cancer with 95% accuracy!