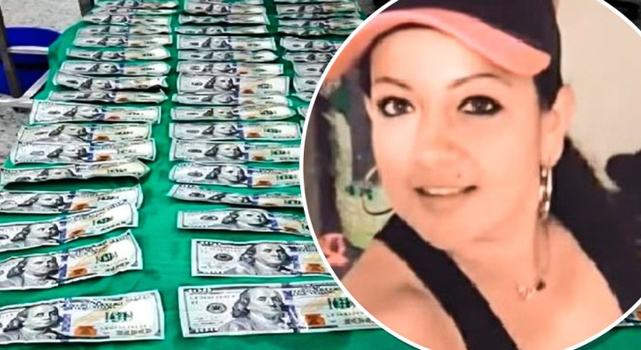 Desperate times calls for desperate measures – this could be the words that entered a Colombian woman’s mind after discovering her husband’s infidelity.

According to news sources, in attempt to hide their life savings, the 30-year-old woman ate up and swallowed 57 pieces of $100 bills.

In a news article, it was officially reported that Sandra Milena Almeida swallowed a total of £7,000 ($9,000) in cash after finding out that her husband had been unfaithful to their marriage vows.

It was only discovered after she was rushed to the hospital due to extreme abdominal pain. After hours of operation, doctors then recovered bundles of cash notes inside her stomach. In her official statement, Mrs. Almeida said that she had been secretly saving the money for a vacation with her husband.

Fortunately, she immediately discovered that he was cheating on her before the vacation took place.

Now, instead of using the money for the vacation she decided that she will just use it to leave him and start anew.

But before she can even make a move, her husband discovered the stash of cash and demanded half of it.

This is where Mrs. Almeida started eating the money rather than hand it to him knowing that he will just use it for her other woman.

She didn’t tell anyone about what she just did, even after she was rushed to the hospital due to severe stomach pain.

The doctors only found about it after performing an X-ray through her stomach and intestine.

Juan Paulo Serrano, the Director of Surgery at the University Hospital of Santander, told the media that 57 pieces of $100 bills were found and extracted by the orifice opened in the stomach.

Some of the extra rolls of the money were found in the intestine, which advanced to the colon.

“She ate rolls of bills, they were not wrapped up for any form of illicit transport.

The dollar notes were washed and are in good condition, but the rest of the money was lost because of the gastric fluids,” said Mr Serrano.

“It seems it was an act of desperation by this woman, due to the problem she was facing, to ingest these elements, and this of course affects the patient’s normal intestinal functioning and life,” added by the doctor.

After the successful operation, Mrs. Almeida is expected to make full recovery weeks from now.

When she was asked about her plans for the recovered money from her stomach (if the authorities decided to give it back to her), she just said that she might use it for a much needed luxury holiday.

World’s oldest man alive revealed his secret for longer life on his 146th birthday celebration
Family from Scotland offers $64k, benefits and incentives for a nanny willing to work in ‘haunted house’