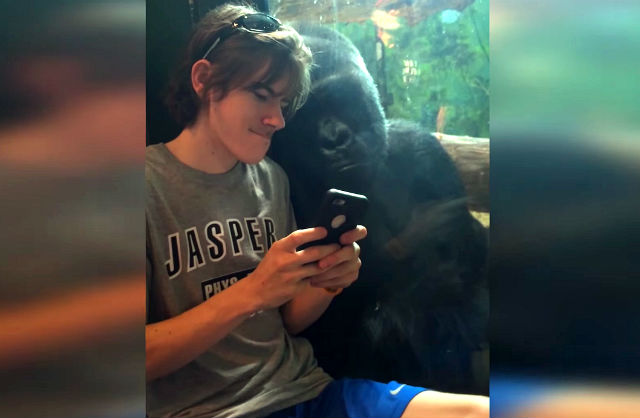 The issue of gorillas in captivity is one that continues to stir major debate in our society today.

Many have argued that these poor animals are simply too close to humans in their make up for them to be held in captivity.

They view them as very humanistic in their physical appearance as well as their thought process.

That is a situation that makes many people uncomfortable and one of those issues have been viral recently in a YouTube video.

A particular amateur video was uploaded online by Paul Ross where in a man was seen showing a gorilla named Jelani photos of other gorillas went viral and has been viewed more than 1.6 Million times on Youtube.

The amazing part of the one minute-twenty eight seconds video was the gorilla’s reaction showing a much human like behavior.

The video gained mixed response, others has express concern about the habitat and happiness of this gorilla.

According to the uploader, the gorilla is housed in an award winning 4 acre gorilla sanctuary in the Louisville Zoo. Then, continue quoting:

“He is a Western Lowland Gorilla, a species classified as “critically endangered” by the I.U.C.N.
The Louisville Zoo works hard to provide Jelani and his group with great nutrition, a stimulating and wide open environment, medicine and a chance and hopefully through awareness and captive breeding they’ll help move this beautiful species off that endangered list.”

You can see about the facility and see how you can help: louisvillezoo.org Gorilla Sanctuary