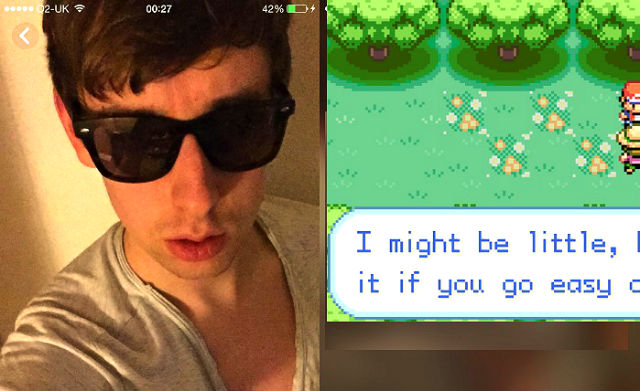 Funny Replies you get when you do Pokémon quotes on Grindr
jrplaza
1.4k
SHARES
FacebookTwitter

What do you do when you take a break from work? Do you go call your parents, siblings or friends to check on them? Do you just sip some great-tasting coffee, chill on your iTunes playlist, and just unwind? Or do you make each break fun and take yourself away from the routine stuff that you usually go through?

Talking about having fun, there many cool stuff one can do during free time. But, what if you decided to hang out in a gay dating app Grindr and chat with some guys in an excitingly entertaining way? This is exactly what Shaun Kitchener did. Kitchener made use of Pokemon characters’ quotes, those initial lines that computer-generated players say in their dialogue bubbles, as he conversed with anyone he came across on Grindr. Ha! Sounds epic!

While Kitchener’s intention was just to see what the person on the receiving end would say or how he would react – some found his actions weird.

At one point when he started the convo with he got a response of

The conversation then just died down.

In one instance, he said, “Hi! I like shorts!” to which his Grindr pal responded with, He then jumped back with

“I always wear shorts, even in winter. That’s my policy.” One instance, when Kitchener mentioned the same “shorts” starter, he was met with a message that goes like this “Me too freeball. Where r u.” He just replied, “I will be happy to serve you anything you please!” Others took the borrowed innuendo seriously and talked dirty to him. But, probably, the best of the best conversations he has had with Grindr users was when he came across two mates who wanted great action with him.

It turns out that one of them has a wife who’s away from home and they just wanted him to take advantage of that rare moment.

Kitchener then just shrugged it off, You might wonder: all throughout his short break, did he get any nastier responses from the use of these Pokemon quotes? The answer is a big resounding YES!

Apparently, he received more than one explicit image when he challenged his mate with the phrases “Fine, then! Show me your best!”

Looks like the usage of the game’s character sayings on Grindr effectively rid it of the innocence associated with Pokemon.

How about you? What’s your take on this?