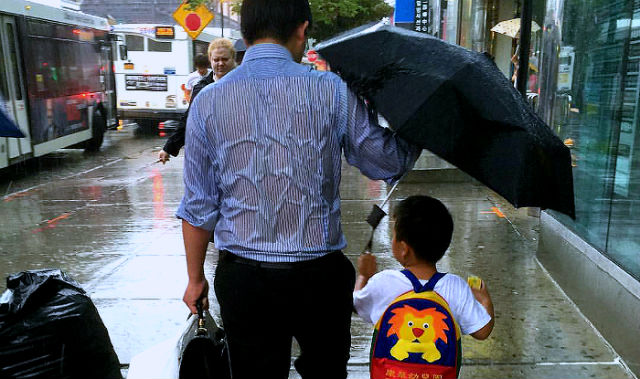 We all know just how much dads are willing to sacrifice for their kids. It could be in little things like giving up his dessert for a child who wanted more or something as huge as giving up his life so his children could live.

That’s a given, really; dads will do anything for their kids!

Still, this becomes more touching and real when there is physical evidence to the love a father has for his kids.

This is the real reason why the photo of a rain-drenched dad holding an umbrella over his dry son quickly goes viral on the web.

Yes, kind deeds, especially those by parents to their kids, are certainly not unusual and are, in fact, expected of them yet this does not change the fact that the photo was touching in so many ways.

If you look closely, the dad was soaked all over from the downpour yet his son remained dry, except for his shoes and lower pants – expected since the child was also walking.

It touches our hearts how this dad sacrificed feeling cold under that downpour as long as his child feels warm and dry.

This working dad was holding a leather briefcase in one hand yet he did not mind that the bag was just as drenched as he was, as long as his child remains dry. This simple goes to show that his child is still top priority for him; work comes second!

Some people pointed out how both of them could have stayed dry, if only dad picked up his son! Now, that is surely a good point yet the man surely has reasons for not picking up the child.

One possible reason is that it would surely be difficult for him to hold all three items: his leather briefcase, his son, and the umbrella.

Also, it could have been a long walk and his son might prove too heavy for him to carry – it would be easier to simply let him walk.

Moreover, it is always possible that the dad has a bad back and could not carry the child over long distances. Who knows?

For us and for the thousands out there who applauded this dad’s sacrifice, it does not matter why he didn’t pick up his son as long as he made sure the child was dry and taken care of.

Isn’t that a sweet proof of his love for his son?

Mom’s “Ready to Party” Back-to-School Photo Goes Viral
Funny Toddler Videos: This Cute Girl is Afraid of her Own Shadow