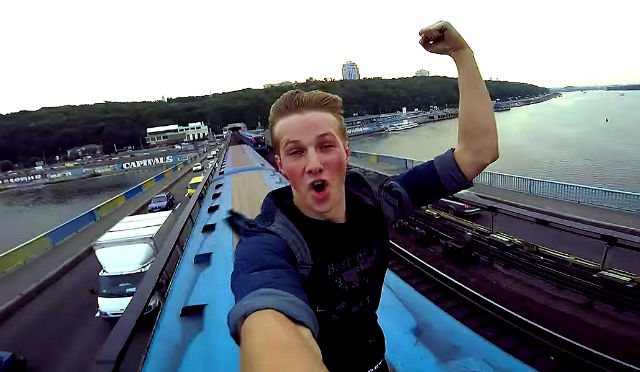 Sometimes it’s not okay to be adventurous and chase the feeling of being on the edge just like this POV clip that went viral this week.

The mind-boggling clip shows a teenage boy that jumps on the roof of a moving train then later on escaped along the top of carriages.

Pasha Bumchik, the Ukrainian Vlogger uploaded his dare-devilish stunt clip on Youtube, gone viral with more than 2 Million views, and gain mixed reactions from the netizens.

In the four-minute clip, the teen was shown filming himself and then scaling the subway fences, before gaining access to the station’s roof.

The train station guard saw him lying on the rooftop and then what seems like attempting to stop his motives, but then teenager jumps on the moving train where fellow commuters look up in shock.

The train then starts to speed and the Bumchik runs along the top of it.

He later turns around and heads back to the divide between the two carriages and drops down onto the little step outside the emergency doors, showing a successful exit.