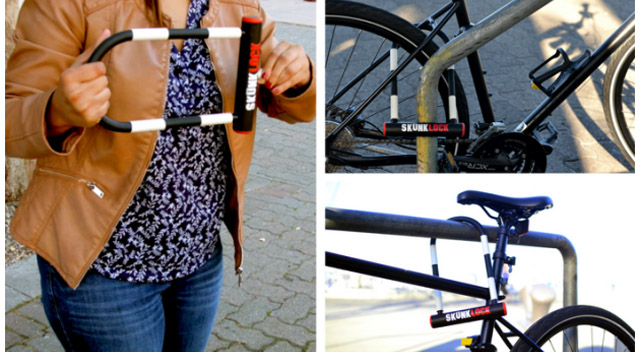 HenSpark / Latest Stories / Bizarre / This extraordinary bike lock will make thieves vomit when they try to steal your bike!

This extraordinary bike lock will make thieves vomit when they try to steal your bike!
Ron Leyba
1.9k
SHARES
FacebookTwitter

Are you sick and tired of bike thefts that happen almost daily? Do you want to protect your own bike against the people who does nothing but steal? This extraordinary lock might be the answer for it!

According to the creators of this one of a kind security device, SkunkLock emits special smelly formula when it is being cut.

It can make a person vomit uncontrollably thus stopping him/her from doing any criminal act. “Basically we were fed up with thefts,” said Daniel Idzkowski, one of the inventors of SkunkLock.

“The real last straw was we had a friend park his very expensive electric bike outside a Whole Foods, and then went to have lunch and chat. We went out and his bike was gone.”

Idzkowski also said that his friend’s bike had two locks in it; both are expensive and heavy duty.

But still, the criminals are able to cut them up and steal his precious bike in just few minutes.

“I realized there really is no solution to this problem,” Idzkowski said.

“The biggest problem in this industry is that people don’t know that the lock that they bought for $20 is absolutely worthless.

It costs at least $100 to have at least somewhere close to where you can at least curb the chances of a thief wanting to steal your bike.” He also added that with the right tools, a thief could easily cut through most locks in less than a minute.

This incident prompted him to create a lock that can possibility put a stop at this criminal act.

With the help of  his co-inventor Yves Perrenoud, Idzkowski successfully created a lock that bike thieves will surely hate a lot.

The U-shaped lock made from carbon and steel has a hollow chamber that holds one of three pressurized gases of their own concoction.

The inventors said that when someone cuts 30% of the lock, that gas erupts in the direction of the gash (towards the person cutting it).

The gas is pretty much immediately vomit inducing and almost has the same effect to pepper spray.

It causes difficulty in breathing that could make a thief stop and run away.

The inventors hasn’t tested the SkunkLock yet in an actual “thief incident” but already tested it on themselves and some volunteers.

The results, according to their tests, are pretty much what they wanted it to be – smells awful, vomit inducing and can effectively repel would-be-thieves.

Although the test results are quite a success, the inventors admitted the lock was not foolproof.

Just like any other locks, it could be picked but it won’t be really easy.

Idzkowski also mentioned that while this lock can’t prevent theft 100%, it can at least lessen the incident.

This is why they are calling it as a deterrent lock and not a solution to theft.