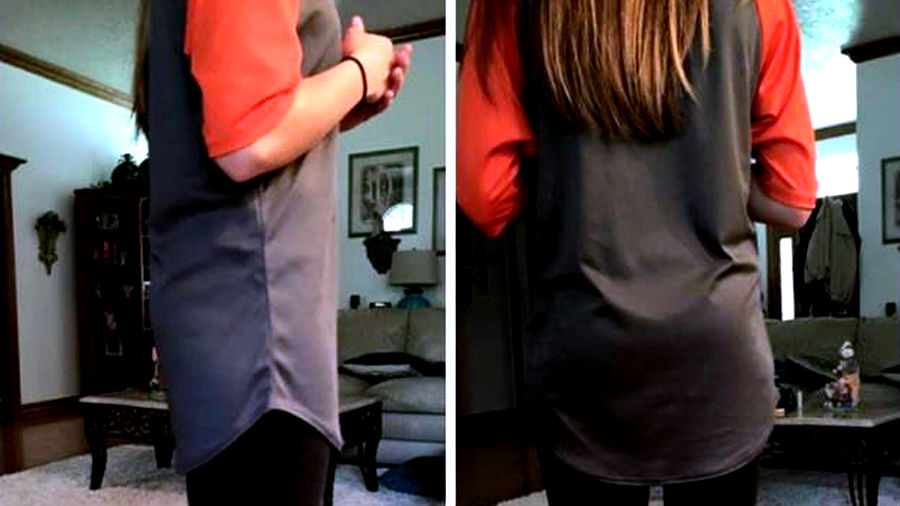 To promote order and uniformity, a number of schools have a dress code, especially if the students are not required to wear a uniform.

Many of these schools have a reasonable dress code, including not allowing students from wearing revealing clothes – but who determines just what “revealing” means?

Well, the clear answer is somewhat a no-brainer: if the clothes reveal a glimpse of private parts, then these should be marked as revealing, right?

The same also goes for skimpy shorts and skirts which might not show private parts but are not quite decent to look at.

However, a recent incident sparked outrage and puzzlement across social media after a school sends 18-year-old girl home for wearing “revealing” clothing – but it actually just consisted of a pair of black leggings and a long cotton shirt.

So, are leggings “inappropriate” now? This is the question in our minds as well as the girl’s older sister, Erica Alyse Edgerly.

Today, my sister was sent home from school for wearing the clothes in the picture below. And I'm sorry but I have to…

Today, my sister was sent home from school for wearing the clothes in the picture below.

And I’m sorry but I have to stand up for my family and for women who are degraded and judged for their bodies and clothing everyday.

People wonder why women feel insecure about their bodies or what they wear..

And it’s because you’re told your clothing is inappropriate when you’re completely fully clothed, even when you’re not showing cleavage or anything.

How about instead of body shaming women, school systems should start teaching 15-18 year old boys to stop degrading women with their eyes and contributing to the rape culture of today’s society.

Bottom line, girls cannot go to school in comfortable clothes THAT COVER EVERYTHING because school systems are afraid that hormonal boys won’t be able to control their eyes and minds.

And that is such a bigger problem than worrying about clothing.

No, I do not believe that all boys in middle school/high school degrade young women or sexualize their bodies. That is my point..

This is not an inappropriate outfit, yet some are worried it might be seen that way, so they send girls home to change to try to avoid an issue and THAT is the problem.

Not to mention, when you send someone home because of inappropriate clothing, you’re taking away from their education.

So I guess it’s more important for boys to not have distractions (even when they’re aren’t any) than a woman’s education. When will people realize how big of an issue this really is?

The post has since gone viral, gaining over 94,000 shares over a period of one week.

Most of those who commented on Erica’s post sided with the sisters, seeing nothing wrong with the outfit and believing the school administration made a mistake in saying the leggings with shirt combination was inappropriate.

“All garments must meet the ‘fingertip rule’ of being below the fingertips when the person’s arms are down by their side,” states the school’s dress code.

Considering Macy was wearing leggings, not just the long shirt, many people think that the fingertip tip should not apply.

Moreover, there was nothing revealing about the outfit; in fact, her shirt sleeves reached her elbow while the leggings covered her knees.

Erica shared their story not just to air frustration over what they believe was unjust but to open people’s eyes how biased dress codes like this one is body shaming girls.

It is time to end the rape culture but it does not just mean stopping girls from wearing supposedly “inappropriate” clothes but also educating boys not to degrade girls and to discipline themselves.

So, what did you think about Macy’s outfit? Was it inappropriate?