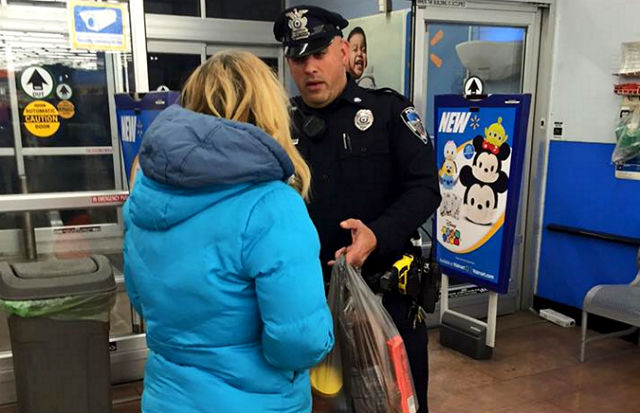 Responding to a 911 call after a woman fainted in the bathroom of a local Walmart in Seekonk, Massachusetts, Patrolmen Keith Perry and Adam Laprade from the Massachusetts Seekonk Police Department had no idea this would soon make them famous on social media.

Upon arriving at Walmart, the two police officers learned that the woman who fainted in the retail store’s toilet was actually homeless and that she fainted because she had not eaten for several days! Touched by the woman’s plight, Officer Perry bought her some groceries from his own pocket.

With a snow storm approaching, the officers knew that the homeless woman could be in danger.

Thus, Officer Perry also arranged for the woman to stay in a hotel for the night.

The homeless woman went to the hotel with some snacks and beverages, courtesy of the kind policeman.

Officer Laprade took photos of his kind comrade shopping for the homeless woman and posted it on the department’s Facebook page.

As expected, the post quickly went viral, with thousands of people praising the cops for their kindness.

After to coming to the aid of a woman in distress tonight, Officer Perry discovered that the woman was homeless and hadn…

But while many people are lauding Officer Perry for his kind deed, many of those who know him said it was something that he is widely known to do, even if no one is looking.

In fact, Lt. David Dyson said no one in their department was surprised at what he did for the woman because he truly has a reputation for generosity.

It was even revealed that the kind officer was shocked by the overwhelming response the post had received, considering that he was only doing something that was typical of him to do!

Still, even with Officer Perry’s reputation for generosity, Lt. Dyson agreed with everyone that the officer had done a good job.

This kindness also uplifts the reputation and morale of cops as the force had recently come to a bad light after several reports of police brutality and other negative issues.