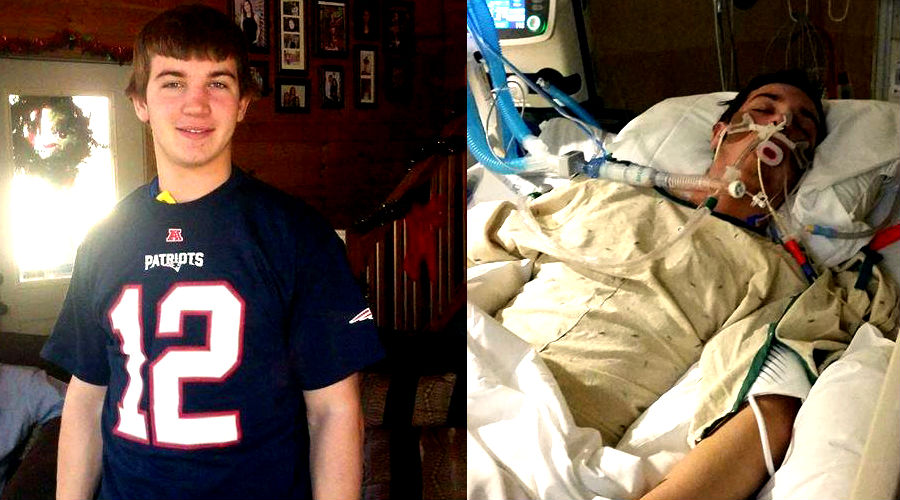 If a family member is in a coma, would you post his/her picture on Facebook and tell others why that happened?

Well, that would certainly depend on the circumstances, especially because that is something really personal and this sick person has the right to privacy.

However, Kelly Smith-Miller of Arnold, Missouri, decided to post her son’s photo in the ICU as well as share the reason why he’s there: overdose of heroin and Xanax.

Her reason for sharing his story is quite admirable because she wants this experience to serve as warning to other drug addicts so they could seek help now, before it is too late.

In a post on Facebook, Kelly explained how her son, 18-year-old Brayden Travis had struggled with addiction since he was 15.

I normally don't share or discuss personal issues on FB, however I feel this is necessary due to the nature of this…

It began with marijuana and soon upgraded to heroin and Xanax.

During one particular session, he used a deadly cocktail of heroin and Xanax, causing him to collapse.

Possibly afraid of the consequences, the people with him did not report the incident to the authorities; thus, it took over 7 hours before he was rescued.

For being unconscious that long and because of the deadly drug combination, Brayden went on a coma and spent weeks in ICU.

Still, this was good news for Kelly as the doctors had told her Brayden might not last for a day because of his grave condition.

The doctors are not sure why Brayden’s condition stabilized, especially because his heart function was reduced to 10-20% while his kidneys and lungs had both failed.

There was also severe damage to his brain, particularly in the hippocampus and cerebellum.

Moreover, he suffered a stroke and developed pneumonia.

Though Kelly was horrified of the thought that she might have to pull the plug on her son if his condition does not show signs of improvement, she decided to share her story to others.

As was expected, the story went viral, now with over 342,000 shares on Facebook.

Some people also shared their own addiction/overdose stories or thanked Kelly for the warning.

According to one of her latest updates, Brayden is now out of the ICU and moved to intermediate care.

His vital signs are stable and he was able to breathe on his own.

Certainly, the road to recovery will be a long and slow one for Brayden yet we’re hoping he could pull through.