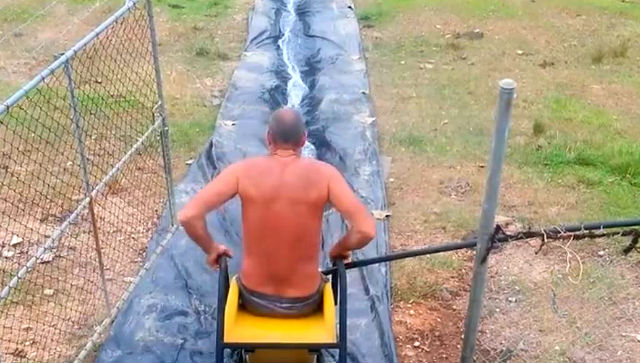 Covering a length of 150 meters long, the “Slip and Bleed” water slide set up by the McKavanagh family in Queensland, Australia has created waves across social media for the epic fun it brings to riders.

Made for Australia Day 2016, the slide was set on a hillside, making it easier for riders to slide down the slippery tarp-covered surface.

This awesome water slide might not be the longest in the world or even in Australia but it did not stop people from admiring the family’s DIY creation which bends twice along its path.

But did you know how the slide got its rather gruesome name, “Slip and Bleed”? Well, the actual reason is really bloody because when eight members of the family decided to have fun at the slide in one go, they ended up piled up on top of the other and filled with bruises (and some wounds) from the incident!

Now, back to the viral video, Kirsty McKavanagh filmed a guy named Daz slipping down the slide. It took him around 30 seconds to slip across the length of the slide – and we sure do hope he did not end up bleeding at the Slip and Bleed!

After the post went viral, some people commented that the family should start charging since a lot of people might turn up at the property to have a good time at the water slide – and that’s not far from the truth since the post already gained a whopping 4.25 million views within just a week after it was posted! Amazing, isn’t it?

Are you willing to try this fun slide?

Tried and tested. Ready to go.