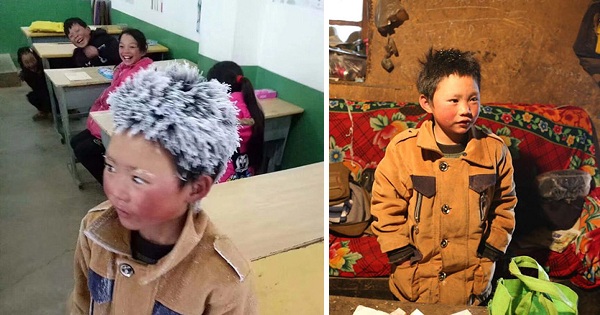 The world had worried about the plight of an 8-year-old boy whose hair was frozen last January while walking towards his school in mountainous Zhaotong, China.

Wang Fuman walks 4.5km to school each day, braving the freezing winter temperatures without head covering and winter clothes because his family is too poor to buy him any. His teacher was so amused by this looks but also admired the kid for still being able to smile despite his situation that she took a photo and shared it on social media where the boy quickly went viral. Help poured in for the boy, his family, and even Zhuanshanbao Primary School where he’s studying.

Seeing that everyone seems to be helping out this famous kid, a headmaster named Yang at a private school near his home offered to educate the boy for free. Fuman would not just enjoy free tuition fees but also board and lodging so he wouldn’t have to trek in the freezing cold to get to school.

But the offer was too good to be true. Just when Fuman was already enjoying his new school and grateful for the tasty meals he gets to enjoy, the headmaster kicked him out of school because they couldn’t handle the stress of the government and media constantly breathing down their necks due to their famous student. Yang said he wants to get back to running an ‘ordinary school’, without intervention from the government. He promised, though, to continue helping Fuman in a ‘low key manner’, starting with giving his father 15,000 yuan ($2,400) when the latter arrived to fetch the boy.

Wang Gangkui, Fuman’s dad, was stunned by the headmaster’s decision but the boy was devastated. He had been enjoying the new school, saying it had much better teachers and pupils than his old school.

“I ate better, too. Unlike at home, when my granny is busy, my sister and I need to find food for ourselves … because we don’t know how to cook, we just boil potatoes, but at Xinhua School I ate so many different things,” the ‘Ice Boy’ added. So, now he’s back in his ramshackle house and has to trek back to school every single day. The difference is that he’s got some winter clothes now…