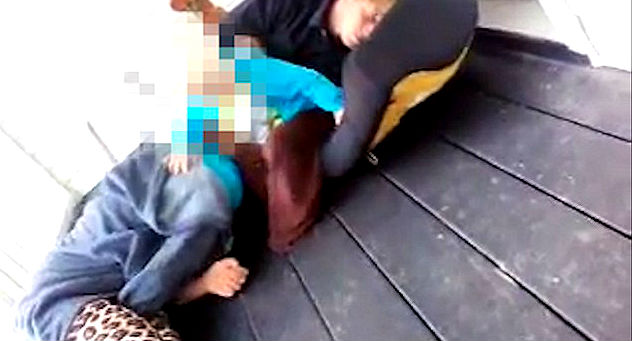 Allegedly high on what is believed to be synthetic marijuana, 18-year-old Lauren Brooke Englett was videotaped while convulsing on a balcony with another person – and her neglected baby was crying loudly but she was completely unaware of what was happening.

The incident happened in Mobile, Alabama but the video of the incident quickly went viral, gaining traction across social media with many people commenting that Englett does not deserve to be a mother.

Many were also concerned about what could happen to the toddler, especially because the place of the incident appears to be a balcony and the child could have easily pushed a chair there to climb on top – and Englett or her companion would have no idea about what was happening because they were allegedly high on drugs.

Lori Myles of the Mobile County Sheriff’s Office said, “What’s disturbing is a mother using the drugs, ignoring the child, a child walking around on a balcony. We see the state of the other two people there, anything could happen to that child and they would not even be aware of it.”

According to the Mobile County District Attorney’s Office, the DHR was aware of the video in the December and quickly moved to take the child from Englett’s care, placing the toddler with Englett’s mother.

Weeks after putting the child in his grandmother’s custody, however, a site checked revealed that Englett also moved in with her mother, something that is in violation of the DHR’s orders as this is considered as unauthorized contact with the toddler.

Thus, the child was removed from his grandmother’s custody and placed in foster care.