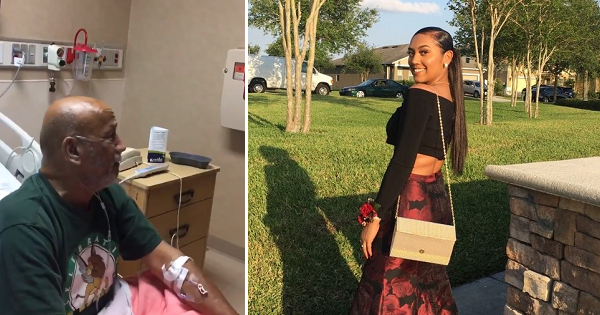 A lot of grandparents love to be part of their grandchildren’s milestones – and that’s really a wonderful thing! In fact, there are actually many grandparents who are closer to their grandchildren then their own children, most likely because they have mellowed down through the years and aren’t as pressured as back when it was their turn to raise the kids to become good citizens of the world.

Now, prom might not be as huge an occasion as a wedding but it is also a significant part of a teenager’s life.

Just like any other teen, Sianni Tirado of Florida was excited to attend her prom. But the senior student recently went viral when she dropped by the hospital to surprise her grandfather who had been excited to see her in the prom dress. Apparently, Sianni and her grandfather were pretty close. Her grandpa was so supportive of her and wished to see her transform for the magical night at prom but he was hospitalized days before the event.

Instead of letting him see photos of herself in the prom dress later, Sianni decided it was best to make the old man feel happier by making him see her in that dress, in person!

“My grandpa was in the hospital on prom night and was upset he couldn’t see me all dressed up… So I went to him😭❤️ “oh mama”,” Sianni captioned the video she shared on Twitter.

“During the time of his reaction I feel like my heart was pounding out of my chest. Seeing him immediately burst into tears like that really made me feel beautiful and I could feel how much he loves me. Afterwards, I felt nothing but grateful that I made him happy.“

But Twitter noticed and the clip quickly went viral. Just a couple of days later, the short clip has been viewed over 1.41 million times and liked by more than 116k people!

Sianni was rather surprised at the massive interest over her post, considering that she had only asked her boyfriend to take the video so she “can have that memory with me forever”.

my grandpa was in the hospital on prom night and was upset he couldn’t see me all dressed up.. so i went to him😭❤️ “oh mama” pic.twitter.com/C3QfatPJIb

Thankfully, her grandfather is now safely out of the hospital but was unsure what to make of their viral story. According to Sianni, she tried to explain to her grandfather what being viral meant, and she thinks he’s finally gotten the point.

But why the huge interest on Sianni’s post, anyway?

It turned out that many people can relate with her experience and were happy that she did this for her grandfather, making him happy on such an important occasion.

Others shared their own experiences, saying they also did a similar thing for their loved ones.