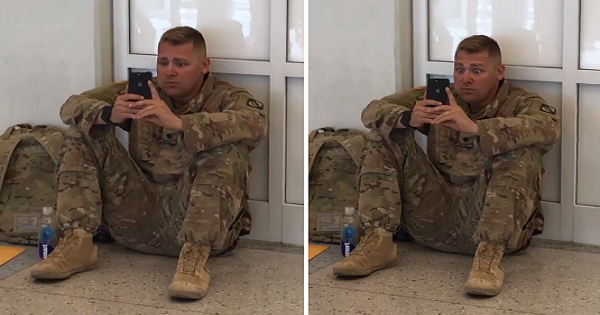 A child’s birth is always an emotional moment, especially for new parents. It is a special moment that most dads want to witness firsthand but there are many who are not able to do so because of the nature of their jobs, especially those working far away from their families.

One soldier recently went viral after fellow passengers noticed him getting emotional as he waited for the birth of his daughter which he was forced to witness via FaceTime because their flight was delayed. While it was unknown how many hours the flight was delayed and whether he would have made it to the hospital just in time had the flight been on schedule, what’s obvious is that the soldier was excited but also a bit apprehensive over his daughter’s birth.

He was wearing a full camouflage uniform and simply sat on the floor of the airport waiting area. According to Tracy Dover who was on the same flight as the soldier, heading to Mississippi, the guy was crying and the other passengers felt empathy towards him but gave him space. Everyone knew how difficult the situation he was in but also knew the joy he is sure to feel once he sees his daughter. Unable to help herself, Tracy took a photo of the soldier and later shared it on Facebook, not to make fun of his crying (who said tough guys shouldn’t cry, eh?) but to remind everyone of the sacrifices that people like him have to go through, including not being physically there with his wife during the birth of his child, to serve the country and protect the people.

This Army soldier was on my delayed flight home yesterday to MS. He had to watch the birth of his daughter on FaceTime….

“This Army soldier was on my delayed flight home yesterday to [Mississippi]. He had to watch the birth of his daughter on FaceTime. He was crying and our hearts were breaking. We all gave him space. When we heard the baby cry, we all rejoiced for him. I wanted to share this because I never want us to forget about our soldiers who serve us every day and the sacrifices they make,” Tracy captioned the post.

After the post went viral, the soldier was identified as Brooks Lindsey from the 2nd Battalion, 114th Field Artillery Regiment. He hails from Brandon, Mississippi.

Brooks’ wife, Haley Fritz Anne Lindsey, would later share a video of him taken from the airport as he watched their daughter Millie’s birth via FaceTime. The clip has since been viewed over 400k times, barely a week after it was posted.

Posted by Haley Fritz Anne Lindsey on Saturday, May 5, 2018

36 hours old and this little one has already made her family a viral sensation. As you can see, she has her mom and…

Teen Drops by Hospital to Surprise Grandpa Before Heading to Prom
Teen Takes ‘Promposal’ to Epic Levels, Gets Engaged to Sweetheart for Real