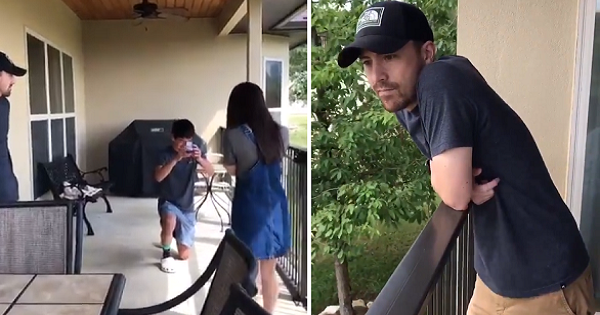 What’s the best age to get married? While many would tell you that there is no right or wrong age in finding love, marriage is a different thing. If you marry too young, it might hinder your plans in life – especially if you haven’t completed your studies yet.

Of course, there have been countless couples who married too young but ended up still succeeding in life and getting to live their dreams but some would tell you though they do not regret having children, it would have been better if they waited some more years so that their lives wouldn’t have been so difficult. All parents want their best for their kids; that often means seeing them complete their studies first, before getting married. Knowing that, Savannah Ajas thought that the best way to prank her dad on April Fool’s Day was to stage a fake marriage proposal.

With the help of her supportive mom, Savannah and her boyfriend staged the perfect proposal prank at the porch of their house. With the entire family watching, Savannah’s boyfriend chose the perfect moment for the fake proposal. He went down on one knee and offered the ring, with Savannah screaming in delight. But dad Andre wasn’t pleased with this otherwise joyful moment. After all, these high school sweethearts were definitely too young to get married! This is definitely every dad’s nightmare! But what can he do? It has been done – and his daughter had said, “Yes!” His face betrayed all the emotions he felt inside. It was even quite likely that he might have felt like punching the guy in the face but that would ruin the moment for his baby girl, right? Whew!

At one point, though, it looked like he was trying hard not to cry but he didn’t say anything at all, despite being asked by his wife whether he had something to say. He was the face of great despair as he looked out the porch, unsure of what to do next. After few agonizing moments, his daughter finally eased his pain as she shouted, “April Fools!” Whew! What a huge relief that must have been.

What can you say about this prank?

Private School that Offered Free Education for ‘Ice Boy’, Makes Him Leave after a Week
Man Takes Internet by Storm as He Clears Snow Wearing Only Shorts and Gloves!