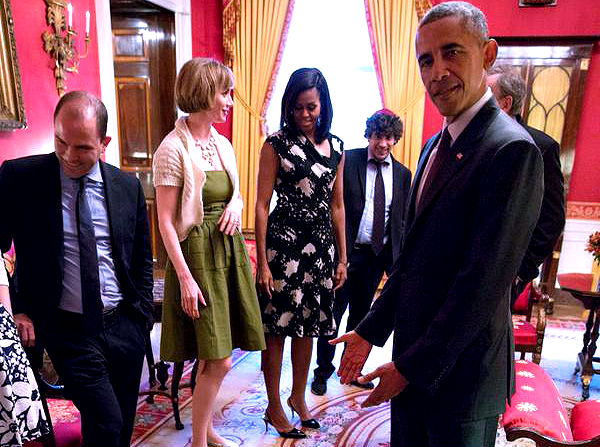 What would you do if you were given the chance to meet face-to-face with the President of the United States inside the Red Room of the White House?

Hmmmm. A lot of us would carry ourselves in a professional manner and speak courteously, of course, but there’s this young girl who was not really impressed with the POTUS – and made herself clear by throwing a tantrum on the floor, right on his feet!

Now, what would the highest ranking official in the US do when faced with such a disturbance?

This really might be the best picture ever: my niece Claudia throwing a fit at Passover. pic.twitter.com/SU1r94QyTd

Well, you have to remember that aside from being the president of the US, he is also a dad and another human being, really.

Thus, he appears to be quite amused by the girl’s antics having probably experienced the same thing in the past with his daughters; though he did not issue a statement about the incident before the media or using his verified Twitter account (which is new, by the way).

As for the child’s family, they were amused that the girl became a viral sensation after her rather bratty actions inside the White House.

We all have to remember that kids might not understand things like hierarchy in society; thus, she might have forgotten her manners while in front of the country’s highest ranking official.

It was her uncle who first released the now-viral photo.

A lot of people picked up the Twitter post, creating funny memes that gave the president powers or simply made fun of the situation.

Of course, there were a lot of trolls and Obama-haters who took advantage of the situation and created hateful memes focusing on Obama and how the child appeared to have hated meeting him.

On Reddit, a Photoshop battle ensued wherein people tried to outdo each other in making the best memes or edited photos using the photo. The results were rather entertaining.