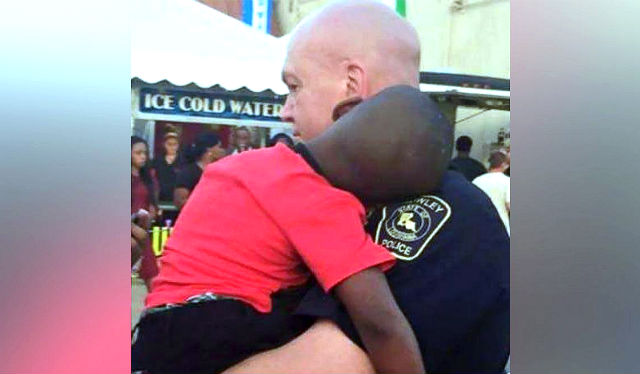 Sophocles once said, “To be doing good deeds is man’s most glorious task.”

This definitely applies to anyone who does something good for others.

And the returns are great especially when social media comes into play for commending such acts.

This is the case of Officer David Taylor, a policeman who has worked for 18 months at the Crowley Police Department.

Last weekend, Officer Taylor was patrolling the International Rice Festival in Crowley, L.A., when a woman approached him with a young child. She told him that the boy was separated from his mother while they were touring around.

Taylor then decided to pick the reported lost kid and comforted him. It took about 30 minutes before the boy was finally reunited with his mom.

Pictures of Officer David Taylor are going viral from the Crowley Rice Festival this weekend. The little boy got separated from his mom, so Taylor held him until she was found. #goodnews

In an interview with ABC News, Taylor said, “He was extremely upset…I put him on my shoulders to see if he would be able to see his parents.” He noticed that “he started to fall asleep, and I moved him down to my chest.”

Since then, a photo of him carrying the sleeping child has been making rounds on popular social media, gained more than 5 thousand likes on Facebook.

Another photo of the young boy sitting on Taylor’s shoulders has also circulated in Twitter.

Taylor told ABC News that he’s not a fan of all the attention and insist on saying that he was just doing his job.

“What I was doing is nothing different from the rest of our law enforcement colleagues. The only difference is that someone took a photo of me,” The officer also explained that he didn’t know the name of the kid nor of the kid’s mother.

For all the kind wishes he has received, Taylor is truly grateful and hopes this incident will help change how people perceive the police force in general.

True enough, there’s much to be known and loved about human kindness and goodness.