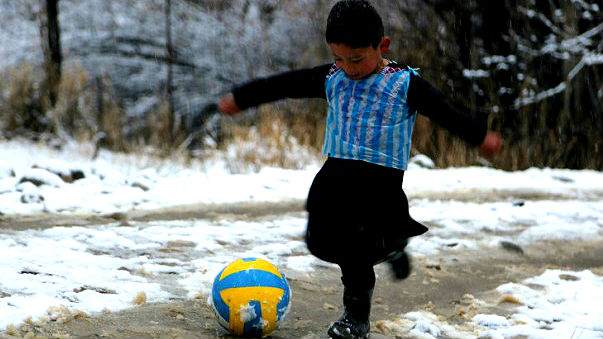 Murtaza Ahmadi lives in Jaghori district of Ghazni province in war-torn Afghanistan with his family.

The 5-year-old boy is so poor that his parents could not afford to buy him a Jersey for soccer, a game he loves so much even when the sport is rarely played in his country.

Of all the soccer players he had watched play, it was Lionel Messi who he enjoys watching the most.

In fact, the young boy is hopeful that he would get to meet his hero someday.

The soccer player’s name is also quite popular in the household; with Murtaza’s dad Mohammad Arif Ahamdi quoted as saying that he wants his son to become the “Messi of Afghanistan” in the future.

When Murtaza asked his dad to buy him a Messi soccer jersey, the poor old man could only say “no” to his son because authentic jerseys are expensive and replicas are still way out of their league!

To make the disheartened young lad happy, his older brother Homayoun made him a makeshift jersey using a striped plastic bag, then writing Messi’s name on it.

Despite the poor condition of his DIY jersey, Murtaza was so inspired that he played around while wearing it!

The plastic jersey did not last for long, we’re quite sure of that, but his older brother’s loving gesture is sure to stay in Murtaza’s heart.

Now, Homayoun had taken photos of his younger brother and posted these on Facebook – and these went viral!

At first, Murtaza was wrongly identified as an Iraqi Kurd but his uncle Azim Ahamdi, who lives in Australia, recognized the boy and corrected the news.

Still, the family had no idea that the snapshots had made waves on the web until dad went to Afghan capital Kabul where relatives told him about the viral photos!

Mohammad revealed, “He asked me to buy him a Messi jersey but I am a farmer and could not afford it.”
“Murtaza wants to meet Lionel Messi in person one day,” the old man added.

“I want my son to become a good soccer player in the future and become the Messi of Afghanistan.”

(via Times of Israel)