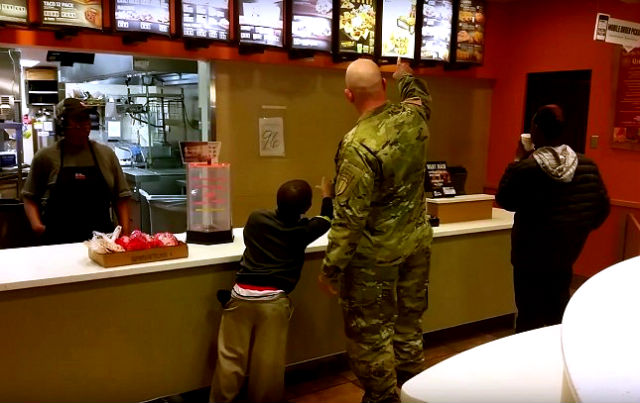 Currently stationed at Fort Benning, Georgia, Lt. Col. Robert Risdon was on his way to Columbus, Georgia when he and a friend stopped over at a Taco Bell in Greenville, Alabama to grab a quick dinner.

While there, two boys asked whether he would like to buy a box of “homemade baked goods” they were selling. Even if he wanted to buy some of the goodies to help the kids, Risdon did not have cash.

So, he asked them if they were hungry as he could not buy their goods but could treat them to dinner.

When the boys admitted to being hungry, the soldier did not hesitate to bring them to the counter so they could order a meal for themselves!

Touched by the soldier’s gesture, the younger boy told Risdon he wants to be just like him someday before proceeding to the execute a salute with his left hand.

The soldier corrected the young lad, teaching him how to salute using his right hand.

Someone dining at the restaurant, Jason Gibson, noticed the touching moment.

He captured it on camera and shared on Facebook where it went viral!

I was in a taco bell tonight when two kids came in trying to sell home made desserts for money. I over heard a soldier…

After the post became a huge hit, Risdon expressed surprise that such a gesture would go viral considering that, for him, it was but a natural thing to do.

Although he was reportedly “blown away” by the attention he received over his random act of kindness, the soldier said that this gesture “did not merit” the attention it was getting.

This simply goes to show what a kind-hearted man Risdon is by nature.

Not only did Risdon give the kids a meal, he also gave them a wonderful piece of advice. He said, “When you’re older and you’re in a position to help someone out — don’t pass it up.”