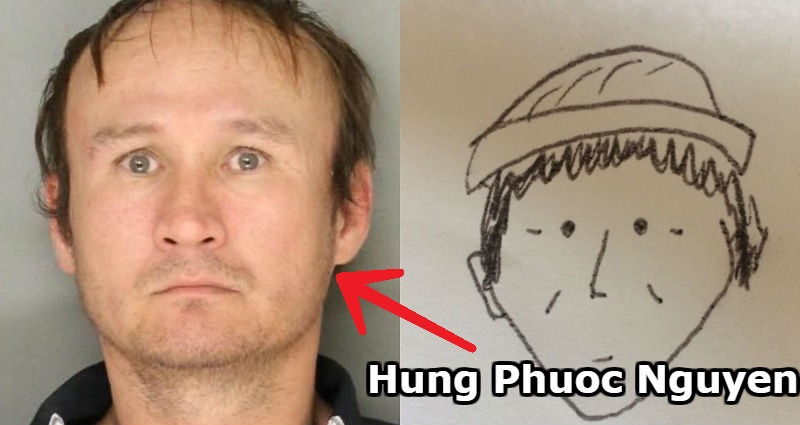 Netizens were left laughing over the hilariously poor sketch a witness made of the suspect who pretended to be an employee of Central Market in Lancaster, Pennsylvania, before carting away an undisclosed amount of money and leaving on foot.

But while netizens were greatly amused at the sketch and thought this would be useless to anyone investigating the case, they had underestimated the cops. After seeing the sketch and interviewing several witnesses, the cops were able to determine the identity of the man in the poor drawing: a homeless 44-year-old guy named Hung Phuoc Nguyen. By Jared Kofsky/PlaceNJ.com (Own work) [CC BY-SA 3.0], via Wikimedia Commons

Last January 30, Nguyen went to Central Market. Seeing that an employee stepped out of the store for a while, he seized the opportunity and pretended to be an employee at 23 N. Market St. Minutes later, he was out of the shop, carrying an undisclosed amount of money.

A witness first described the suspect as “a male 30-40 years of age, 5’04” tall, petite build and was possibly South American or Asian.” Instead of getting stumped over the rather poor sketch of the suspect that the witness provided, however, the cops immediately recognized Nguyen from the drawing!

Can you see the, errrrrr, resemblance? The official police report explained, though, “The suspect was further described as having straight, black hair that covered his ears and that he had wide-set cheekbones and a pointed chin.”

“After the initial release, some Investigators and veteran Officers recognized the physical description and modus operandi for the theft suspect. While the sketch provided by the witness may have appeared amateurish and cartoonish, it, along with the distinctive physical descriptors, jogged the memory of at least one investigator to provide a potential suspect name.”

After that, netizens applauded Lancaster Police Department for identifying the suspect despite the poor sketch. Nguyen will face two counts of theft by unlawful taking but the cops still have to arrest him as he was not seen at his usual hangouts.