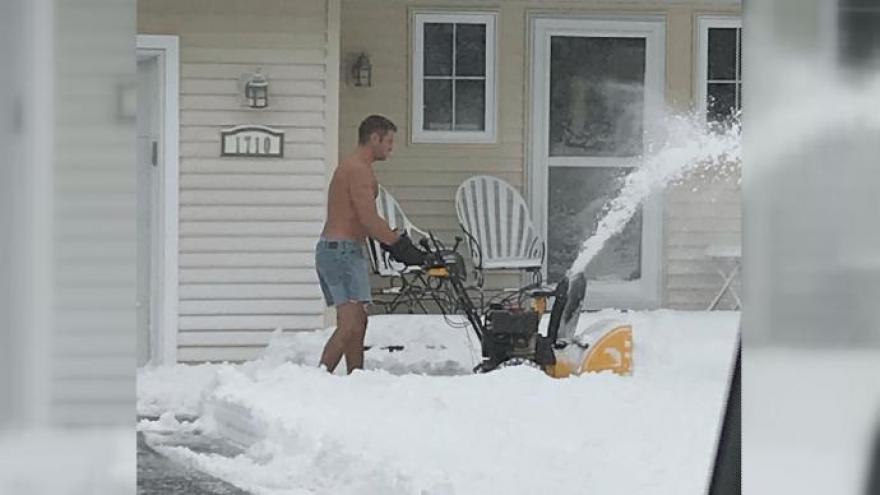 It’s 27 degrees Fahrenheit (-2.8 degrees Celsius) outside but one guy in Wausau, Wisconsin did not seem affected by the cold weather as he cleared the snow from his yard while wearing nothing but shorts and gloves! Where’s your top, man?

Dad of four Patrick Schmidt definitely took the internet by storm, well snowstorm, as he cleared the snow in what could only be described as a summer outfit! He said it was a prank for his wife but he certainly beat that university student who went viral for wearing shorts and a short-sleeved polo in a -8C snowstorm.

According to Patrick, he wore the shorts (it was really made from cut-off denim pants) as it was the first clothing item in sight.

“They were the only ones there, I went downstairs, had breakfast with the family and I knew that I could snow blow or I could go change and I was like ‘oh, it’s only 27, so I can probably just do it with a pair of gloves and boots on,” Patrick shrugged.

“I figured it would entertain my wife, and I didn’t really think much of it. We live on a little cul-de-sac.”

So, how did things get out of hand and his photo plastered all over the internet? LOL. Well, it was all thanks to a ‘sneaky’ neighbor who was also acting on his wife’s orders. Ah! The plot thickens…

The Schmidts’ neighbor Nicole Thomas revealed, “I was cooking breakfast looking out my window to see my neighbor shirtless in cutoff jean short.”

She couldn’t stop laughing at the sight but once she did, she ‘ordered’ her husband to snap a photo as a joke; the two families are really quite close.

So, Mark Thomas took his truck outside to get closer to Schmidts’ house and snapped the picture which his wife posted on social media.

“Can you out-do this? I don’t know. We’ll have to see what he comes up with I guess,” Nicole said, explaining that they weren’t actually surprised with Patrick’s antics because he is always playing pranks.

Guess no one can outdo that now, eh? So, while you complain about the extended winter, think about this guy.

“Nobody wants it to snow this much in April, but what are you going to do? It’s here, we live here, no one forced us to be here so, may as well get out enjoy it, have a little fun with it,” Patrick added for good measure.