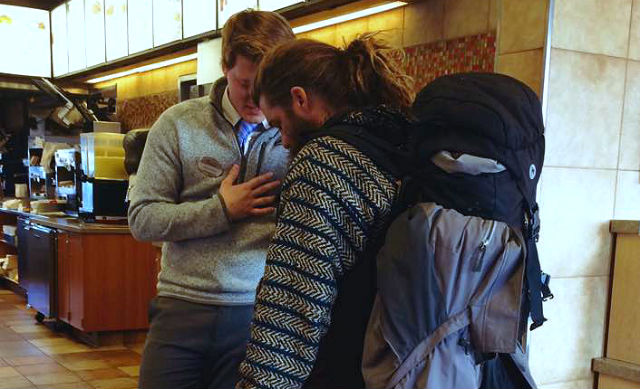 How often do you see an establishment’s manager taking time off his/her busy schedule just to ensure that a homeless guy receives a hot meal and to also pray with him? The chances are slim on that one, I am quite sure!

For this reason, a netizen’s post about a restaurant manager who gave food and prayed with a homeless man easily went viral on social media.

A guy named Joey Mustain shared the story of how he and his young daughter Stella were able to witness the heartwarming moment at Chick-fil-A in Murfreesboro, TN.

In his rather touching post, Joey detailed how he overheard a homeless man ask the restaurant’s service staff for some scraps he could eat for a meal.

Instead of giving him the request, they called the manager who told the guy that they were not giving him scraps but a full meal!

But what really touched Joey was not the act of giving the homeless guy food because, well, anyone could easily do that; instead, it was what the store manager did afterwards that surprised the silent onlooker for the former actually paused for a moment to pray with the guy!

“As busy as they were, the manager stopped then and there, laid his hand on the man, and proceeded to pray. I heard love in that prayer,” Joey wrote.

While many restaurants would not hesitate to shoo away the homeless guy, not only did this one respond with love, it also shared a life lesson to others.

Joey added, “The homeless man wasn’t some untouchable stain on business. He was the reason that store opened its doors this morning (or any morning).”

For his part, Joey taught the lesson to his daughter by explaining the situation to her.

To his surprise, the young girl also bowed her head in prayer! What a heartwarming moment…

I took Stella to Chick-fil-A today. It's our normal daddy/daughter spot. It's clean, so good, and the playground has a…