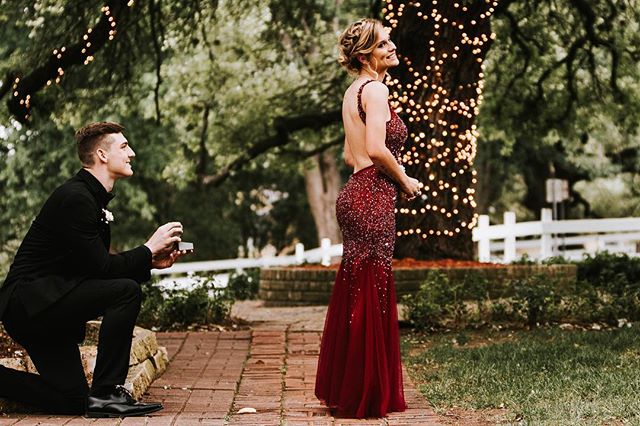 But one teen from Texas hill country went viral after taking his promposal to epic levels when he actually proposed marriage to his sweetheart – and she said, “Yes!”

Dawson Moore enlisted the help of his sister, who happens to be a professional photographer, to propose to long-time sweetheart, Amber Brownlee as they prepared to attend Belton High School’s prom in April.

Under the guise of taking photos for the prom, Dawson took Amber along as they posed for his sister, Hope Johns who owns Twisted J Photography.

Because she had a beautiful back tattoo and was wearing a backless dress, Amber took the opportunity to ask Dawson for a photo of her back. As she posed for the pictures, Hope continued clicking her camera to capture the moment.

She really thought Dawson was taking photos of her back; what Amber didn’t know was that he was busy composing himself as he prepared to take this promposal to a different level.

When Dawson was ready, Hope told Amber to turn her back to face him. She was definitely surprised to see him kneeling there, holding out a ring.

“Every once in awhile, in the middle of an ordinary life, love gives us a fairytale.” Beautiful edit by: @ebu.photography

At first, Amber as too surprised to react. After all, most marriage proposals don’t happen on your way to the prom! One might expect an elaborate prom proposal, perhaps, but never a marriage proposal at this point in time.

But after the initial shock wore off, she realized that the proposal was for real. She gave him a kiss and they hugged. While it wasn’t shown on the video, she wore the ring moments later.

Dawson later posted the unique promposal-proposal video on Twitter, cheekily captioning it with, “Promposals are overrated. Let’s do the real thing😎”

Promposals are overrated. Let’s do the real thing😎 pic.twitter.com/f31hhHiJx5

While they intended this for family and friends, the clip quickly went viral and has received over 9.9 million views some 3 weeks later!

“We were both very surprised at how the video and pictures took off. We just shared it for friends and family — we never thought it would go around the world,” Amber admitted.

The post received mostly positive remarks from supportive netizens, with some also sharing similar stories and photos of their parents or of themselves, marrying at a young age.

These two are so photogenic, they made my job so easy. I’m so happy I was able to photograph their prom for the second year in a row! Beautiful edit by: @kaylatracyphotography

But while many are gushing over this sweet, young love, others also bashed the two for making a commitment at such a young age. The two are unfazed, however.

While they are officially engaged, Dawson and Amber are not yet planning to get married anytime soon. The high school seniors plan to finish their college degrees first and focusing on their studies before eventually planning their marriage.