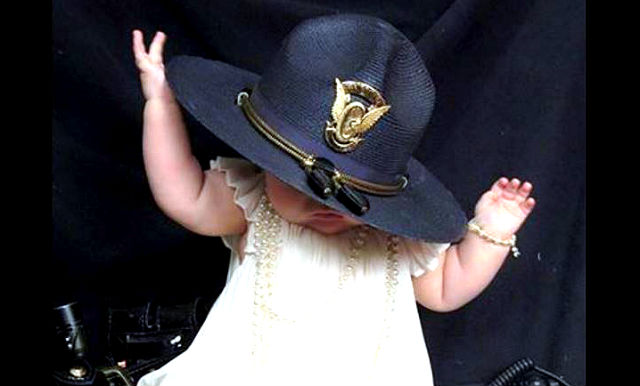 While responding to an accident, Colorado State Patrol Trooper Jamie Jursevics was hit by a drunk driver.

Although medics at the scene were able to rush her to the hospital, she passed away and left behind a lovely little daughter who has to grow up without her mother.

Outraged by the situation but wanting to honor their fallen officer, the Fremont County Sheriff’s Office posted a snapshot of the toddler wearing Jursevics’ hat while the rest of her uniform was laid around the little girl.

This lovely snapshot would have been an adorable photo of the baby that Jursevics could cherish for life but she was not even able to see this; moreover, she will no longer see more photos of the sweet baby growing up to womanhood just because of some drunk driver’s stupid mistake.

The photo shared by Fremont County Sheriff’s Office on their Facebook page did not identify the culprit who snuffed out the life of the toddler’s mother but it included a warning message that touched thousands of netizens.

For anyone who is planning on just having a "few beers" and driving home after, look at this little girl. She will grow…

“For anyone who is planning on just having a “few beers” and driving home after, look at this little girl. She will grow up without her Mother, Colorado State Patrol Trooper Jamie Jursevics, who was hit by a drunk driver and killed last week. Is it worth it? #‎DrunkDrivingKills‬ #‎DriveSober‬ #‎MoveOver‬ #‎CSP‬ #‎TrooperJursevics‬ #‎FCSO‬,” the post read.

This touching post has since gone viral, gaining close to 9,300 shares within just a day after it was posted by the sheriff’s office.

Many of those who commented on the post remarked how adorable the toddler looks and how tragic it was that she must grow without a mother because of the stupid actions of one irresponsible driver.

By using the heartwarming photo to campaign against drunk driving, the sheriff’s department had surely hit a nerve.

While many people do not think twice about driving even if they are drunk, we are all hoping that this child’s photo would stop them from doing so in the future.

Sadly, the late state trooper’s daughter has to be a poster child for drunk driving but, hopefully, she will be the last child affected by an irresponsible driver.