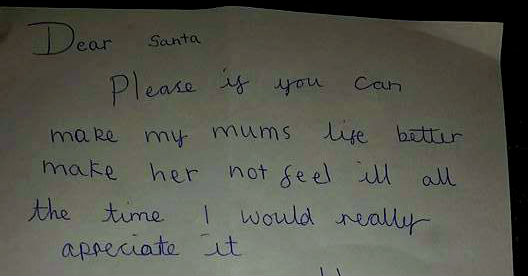 Christmas is the time for giving and receiving presents. It is also the time for young kids from all over the world to send their wishes to Santa Claus, St. Nicholas, Father Christmas, or to some other benevolent Christmas figure.

While most kids are wishing for dolls, toy cars, new clothes, new shoes, new gadgets, or other fun items for themselves, there is a child in Southampton, England, who does not wish for such things for herself – only that Santa make her mother feel better.

Bobbie-Mae Chalk, 11, has watched her mother suffer a form of inflammatory bowel disease called Crohn’s disease over the years.

Diagnosed with the condition since 2006, Debby Chalk revealed she’s been having more trouble with Crohn’s disease these past two years, especially struggling with medications and keeping it all under control.

Debby said she has always tried to keep a strong front for the girl, saying “I was a little bit surprised as I always feel like I put on a brave face and hide my illness well but clearly nothing gets past her.”

The perceptive child must have felt her mother’s suffering; thus, she wrote a touching letter to Santa.

Please if you can make my mums (sic) life better and make her not feel ill all the time, I would really appreciate it.

Make her life more and more better, it hurts to watch her suffer, so please make it better.

If I had one wish in the whole world it would be to help.

"My daughter gave me her letter to post to Santa last night and I thought I'd share it with you guys. I was a little bit…

The child had folded the letter and requested her mother to send it to Santa.

Curious as to what the child was asking for, Debby later checked the letter.

She was truly surprised to learn that her child was wishing for her to get better. Touched by the child’s gesture, Debby posted a snapshot of the letter on Facebook.

Debby said, “I welled up and couldn’t believe it, makes me so proud to be her mum.”

The touching post was picked up and shared by the Facebook page of charity organization Crohn’s and Colitis UK where it quickly went viral.

Restaurant Goes Viral after “Firing” Customer Over Rude Rant Against Autistic Employee
Nampa “Proposal” Went Viral Even if the Couple’s Been Married for Years!